It's been a couple of years since NASA outlined its Journey to Mars program that, with many milestones along the way, ultimately envisions humans landing on Mars in the 2030s. Tackling that huge feat will require scientists to come up with solutions to far... 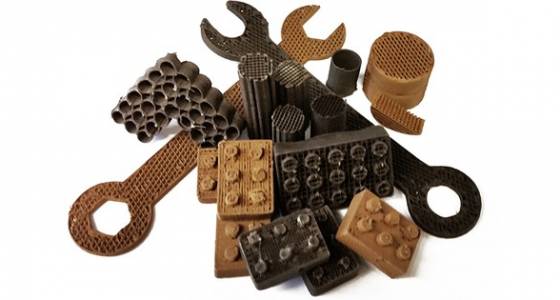 It's been a couple of years since NASA outlined its Journey to Mars program that, with many milestones along the way, ultimately envisions humans landing on Mars in the 2030s. Tackling that huge feat will require scientists to come up with solutions to far more problems than landing on the moon ever required.

The much longer journey means astronauts will need ways to grow their own food, build their own shelters and handle repairs because cargo space will be limited. In 2013, NASA started looking into ways to use 3D printers for manufacturing items in space like tools and repair parts, and even experimenting with moon rocks as a material.

Now, Northwestern University has demonstrated that extraterrestrial materials are suitable for tool making and much more. A team of researchers was able to print structural objects like tools and building blocks using synthetic lunar and Martian dust. They did this by using a special 3D printing technique developed by engineer Ramille Shah, called 3D painting which uses ink-like materials in the additive manufacturing process.

“For places like other planets and moons, where resources are limited, people would need to use what is available on that planet in order to live,” said Shah, assistant professor of materials science and engineering at Northwestern’s McCormick School of Engineering and of surgery in the Feinberg School of Medicine. “Our 3D paints really open up the ability to print different functional or structural objects to make habitats beyond Earth.”

The dusts are NASA-approved simulants of lunar and Martian dust that are similar to the real thing in composition and particle shape and size. The team used the dusts to make the 3D paints by combining them with some simple solvents and polymers. The resulting ink is still 90 percent dust by weight and can be extruded by a 3D printer.

The printed material, unlike moon or Martian rock, is flexible, elastic and tough – making it an even more durable material. The material can be bent, rolled and cut if needed. The team is now working on firing objects printed with this material in a furnace, which transforms them into hard, ceramic-like pieces.