Zlatan Ibrahimovic powered in a late header to win the League Cup for Manchester United on Sunday, sealing a 3-2 victory over Southampton after a two-goal lead was thrown away by Jose Mourinho's side.It was the 35-year-old forward's second goal in the Wembley... 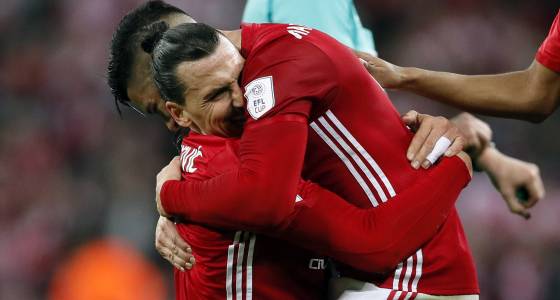 Zlatan Ibrahimovic powered in a late header to win the League Cup for Manchester United on Sunday, sealing a 3-2 victory over Southampton after a two-goal lead was thrown away by Jose Mourinho's side.

It was the 35-year-old forward's second goal in the Wembley final after putting United ahead from a free kick, taking the Swede's tally to 26 goals in an incredible first season at United.

And it ensured Mourinho will become the first manager in United history to win a trophy in his first season, adding to his three League Cup triumphs with Chelsea.

United's fragile defense, though, nearly contrived to throw away the chance of glory.

Although Jesse Lingard extended United's lead in the 38th minute, Southampton fought back with goals either side of halftime from Manolo Gabbiadini. But as Southampton pushed for the victory, Ibrahimovic produced the bullet header in the 87th minute from Ander Herrera's cross.