TAMPA -- Three days into spring training baseball, the Yankees have been impressive. Nobody is hitting the contenders for the two open rotation spots, nobody can run on Gary Sanchez, new DH Matt Holliday looks ready to have a big reason season and the... 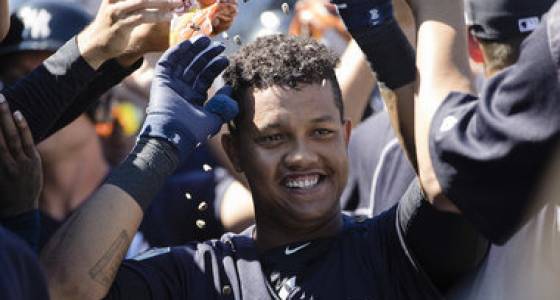 TAMPA -- Three days into spring training baseball, the Yankees have been impressive.

Nobody is hitting the contenders for the two open rotation spots, nobody can run on Gary Sanchez, new DH Matt Holliday looks ready to have a big reason season and the Baby Bombers have been putting on a show.

Sunday was another feel-good day for the Yankees, who thumped the Toronto Blue Jays 7-2 at Steinbrenner Field to make it two wins in three spring games.

This outing followed ones by three other contenders who each set down six hitters in a row in their first outings, Bryan Mitchell and Luis Cessa last Friday, then Adam Warren on Saturday.

The Yankees took a 3-0 second-inning lead Sunday on a three-run homer by second baseman Starlin Castro.

Other Sunday highlights included Sanchez gunning down two Blue Jays basestealers in the third inning and Holliday going 1-for-with an opposite-field single to right and RBI groundout in two at-bats for a .750 average (3-for-4) over his first two games as a Yankee.