TAMPA — James Kaprielian is convinced he will be ready to start the season for one of the Yankees’ minor league clubs.Nevertheless, that doesn’t mean the Yankees’ top pitching prospect isn’t eager to get into a big league exhibition game.“I feel... 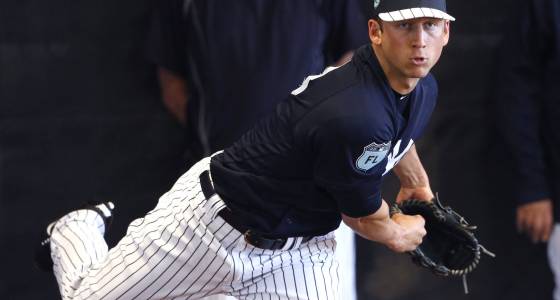 TAMPA — James Kaprielian is convinced he will be ready to start the season for one of the Yankees’ minor league clubs.

Nevertheless, that doesn’t mean the Yankees’ top pitching prospect isn’t eager to get into a big league exhibition game.

“I feel like a caged bull, I just want to go out there and compete and be with the guys,’’ Kaprielian said after throwing live batting practice Tuesday on a back field at George M. Steinbrenner Field. “Right now the plan is what it is and my job is to be a baseball player. I am not the GM or the pitching coach.’’

The reason Kaprielian is being brought along slowly is that his 2016 season was limited to three starts for Single-A Tampa because of a strained right flexor tendon injury suffered in April. The next time the 2015 first-round pick worked again was in the Arizona Fall League.

Since he pitched just 18 innings last year, it’s likely the soon-to-be 23-year-old will open the season at Tampa, where the weather will be decidedly better than Double-A Trenton and Triple-A Scranton/Wilkes-Barre in April.

Kaprielian said he doesn’t know when he will pitch in a game, but isn’t worried about not being ready for the start of the season.

“Absolutely, definitely,’’ Kaprielian said when asked about the subject. “I am feeling good.’’

Yet, the exhibition season is in its infancy stage, so there isn’t an urgency to push such a valuable commodity.

“It’s early right now, I think that’s the biggest thing and that comes from talking to the older guys,’’ Kaprielian said. “I was talking to CC [Sabathia] and he just told me, ‘It’s early right now. You don’t need to worry about the season too much. Take it slow, take it one day at a time. Take care of what you have to take care of and you are going to be ready in no time.’ ”

Luis Cessa’s first start and second outing of the spring was “OK,” according to Girardi after the Yankees beat the Red Sox 5-4 in Fort Myers.

The right-hander, who is vying for one of the Yankees’ open rotation spots, surrendered two runs on three hits in a 40-pitch, two-inning outing.

“He was OK,” Girardi said. “He had some long counts, but he battled. I was OK with what he did.”

Cessa, one of five hurlers bidding for two rotation vacancies, said he hung some sliders and gave up an opposite-field RBI double to Pablo Sandoval on a fastball that was down and away.

“He had a good swing,” Cessa said.

Sabathia threw a bullpen session Tuesday. According to the veteran lefty, he will work one more simulated game and then make his spring training debut.

Dellin Betances will make his spring training debut Wednesday night against the Braves at GMS. Betances likely will get one more outing before leaving the team to join the Dominican Republic club ahead of the World Baseball Classic.

Tuesday was the first Yankees-Red Sox game since David Ortiz retired and Girardi said he was happy to see the slugger go — to a point.

Miguel Andujar at third and Gleyber Torres at short booted grounders. Each has two errors on the spring.

Thairo Estrada, a minor league infielder who isn’t on the Yankees’ big league spring training roster, homered for the second straight day. He was joined by Chris Carter and Gary Sanchez against the Tigers. Greg Bird hit two homers against the Red Sox in Fort Myers.

Even those who believe baseball doesn’t require a makeover when it comes to pace of game would have agreed Tuesday’s tilt had the same effect as a handful of Quaaludes. The Yankees’ 9-5 win over the Tigers took three hours and 13 minutes to complete. It was worse in Fort Myers where the Yankees beat the Red Sox, 5-4, in three hours and 24 minutes.

Much has been made of Jacoby Ellsbury’s dwindling stolen base totals and attempts but he swiped second in the first inning.

Bryan Mitchell starts against the Braves in the first night game at GMS this spring. Mitchell had the team made last year when late in spring training he suffered a left big toe fracture pitching against the Braves that required surgery and limited the righty to six minor league outings and five big league games in 2016.