Dale Earnhardt Jr.’s highly anticipated return to racing ended early in Sunday’s Daytona 500.Earnhardt, who missed the second half of the 2016 season with a concussion, was caught up in a wreck on Lap 106. The damage was too severe for his No. 88 Chevy... 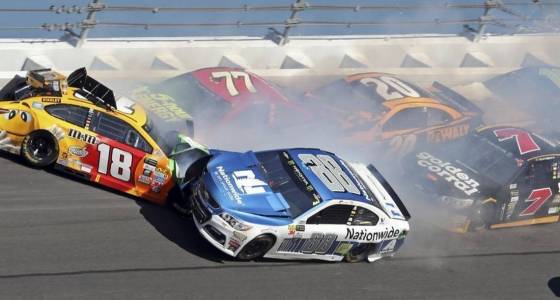 Earnhardt, who missed the second half of the 2016 season with a concussion, was caught up in a wreck on Lap 106. The damage was too severe for his No. 88 Chevy to return to race.

The wreck happened when Kyle Busch – who won the first stage of the race – lost control after a rear tire went down. The accident also took out rookie Erik Jones, Matt Kenseth, Ty Dillon and Elliott Sadler.

Earnhardt couldn’t avoid Busch and ran over part of the front of his car before hitting the wall.

“I don’t know what happened there with (Busch),” Earnhardt said. “He just got turned around. I tried to get the wheel turned and get down the race track, but I lifted off the gas to miss it, and got on the splitter a little bit and the car went straight.

“We jumped him, and got in the wall a little bit. It wasn’t too hard of a hit.”

Earnhardt took his car to pit road, where under new NASCAR rules his crew had five minutes to make repairs. But after taking the car back on the track during the caution, Earnhardt decided to head back to the garage which meant – again under new rules – that his day was over.

“We thought we could get the car fixed, and get back out there and see what we could do with the rest of the day and make up some spots maybe,” Earnhardt said. “But, there was just too much damage. We just can’t drive it like that.”

Busch wasn’t happy about how his No. 18 Toyota lost control and was quick to point a finger of blame.

“Nothing that I did wrong,” said Busch. “These Goodyear tires aren’t very good at holding air, so it’s very frustrating when you’re trying to win a Daytona 500 and you’ve got to rely on other people and they don’t do a good job.”

Busch is now winless in 13 starts at the Daytona 500. He can take some consolation from picking up 10 championship points for winning the first stage and a bonus playoff point.

“It’s very frustrating when we have that down here every single year we’ve been here,” Busch said of the tire problems. “Last year we had it as well, too. It wrecked us in practice and tore up a car – a few cars actually were in that as well.