Dwyane Wade joked that he can relate to the producers of "La La Land," robbed of a big moment by the people who are supposed to support you."#Oscars I know the feeling. I almost had it 2.....," Wade tweeted Sunday night. Here's the correlation:... 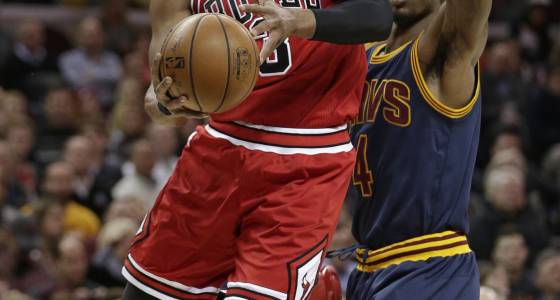 Dwyane Wade joked that he can relate to the producers of "La La Land," robbed of a big moment by the people who are supposed to support you.

Here's the correlation: Wade missed out on a triple double Saturday when teammate Cristiano Felicio poked away a potential rebound in the final seconds of the Bulls' 117-99 rout of the Cavaliers in Cleveland. Wade included a link to a video clip in his tweet.

After the mishap Saturday, the Bulls guard walked away from Felicio, glared back at him for a second then broke out a smile. Wade finished with 20 points, 10 assists and nine rebounds.

In the postgame press conference, Wade said, "I told him I'm not even going to act like I'm not mad at him. I'm very mad at him," interspersed with some laughter.

And on the team flight back to Chicago, in what appears to be a video recorded by Wade, he said, "I'm going to address the elephant in the room: Cris stole my (bleeping) rebound. I'm hot. I'm not gonna — I'm hot! Got my chain on backwards."

Wade swings the camera to Jimmy Butler. "My guy right here got a triple-double. Congrats. Congrats. I was one rebound away from a triple double." Wade stops and playfully glares to the side, then stares at the camera with a look of disgust.

You know what they say, comedy is always based on some truth. Or is comedy is based on misery?