The Blackhawks signed Michal Rozsival and Jordin Tootoo to one-year contract extensions Tuesday, a move that -- at this point -- would allow them to protect Ryan Hartman when Las Vegas takes one player off each NHL roster in this summer's expansion draft.Every... 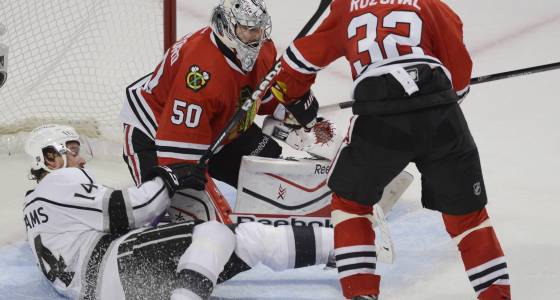 The Blackhawks signed Michal Rozsival and Jordin Tootoo to one-year contract extensions Tuesday, a move that -- at this point -- would allow them to protect Ryan Hartman when Las Vegas takes one player off each NHL roster in this summer's expansion draft.

Every NHL team is allowed to keep seven forwards, three defensemen and one goalie, OR eight total skaters and one goalie. Each team also must expose at least two forwards and one defenseman who is signed through the 2017-18 season AND who played 40-plus games this season or 70-plus games the previous two seasons.

After practice at Johnny's IceHouse West, Hartman said he stopped trying to figure out the expansion draft rules long ago. But will these moves help him stay in Chicago?

"You never know what the reasoning is behind some stuff," said Hartman, who has 15 goals in his rookie season. "Maybe that is the case, maybe it's not. We're happy for those two guys to sign new deals. We look (at it) more them being here for longer than the expansion draft."

Right now, Tootoo figures to be one forward the Hawks will expose. The second player could be Dennis Rasmussen, Tomas Jurco or Richard Panik if they extend any of them. If no other player is signed, watch for Marcus Kruger to be the second forward left unprotected.

On defense, the Hawks must protect Brent Seabrook, Duncan Keith and Niklas Hjalmarsson because they all have no-movement clauses. That means Rozsival and Trevor van Riemsdyk will be exposed to Las Vegas, unless general manager Stan Bowman trades either one.

Due to an upper-body injury, Niklas Hjalmarsson will miss the three games the Hawks play this week. After a four-day break, coach Joel Quenneville hopes Hjalmarsson can return when the Hawks host Anaheim on March 9.

Corey Crawford, who was sick and missed Sunday's game vs. St. Louis, was back on the ice Tuesday, but Scott Darling will start in net Wednesday against the Penguins.

"We want him more than ready," Quenneville said of Crawford. "He can play [Wednesday], but I just think that giving him another day or so to get his full energy back is what we're looking at."

Artem Anisimov was sick and missed practice, but Quenneville said the center will play against Pittsburgh.

Joel Quenneville mixed up his bottom six forwards a bit in practice Tuesday. The third line was Ryan Hartman-Tanner Kero-Marian Hossa, while the fourth was Dennis Rasmussen-Marcus Kruger-Tomas Jurco. … The Hawks have outscored opponents 44-24 in their past 10 games.