The Knicks figure to welcome Kristaps Porzingis back to active duty Wednesday in Orlando.So naturally they plan to be without center Willy Hernangomez. Apparently there is a ban on too much happy news for the Knicks.While Porzingis practiced Tuesday in Tarrytown... 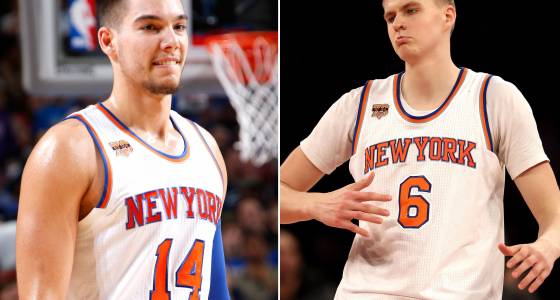 The Knicks figure to welcome Kristaps Porzingis back to active duty Wednesday in Orlando.

So naturally they plan to be without center Willy Hernangomez. Apparently there is a ban on too much happy news for the Knicks.

While Porzingis practiced Tuesday in Tarrytown after missing two games with a sprained right ankle, Hernangomez sat out the workout, also the victim of a sprained ankle.

“I twisted my ankle [Monday]. I stepped on DeMar DeRozan,” Hernangomez said.

As for Porzingis, he said he felt good during the workout, though while warming up, “It was still a little stiff,” but that subsided with activity.

“I did all my exercises before, made sure it’s warm and didn’t feel any pain,” said Porzingis. “I went 100 percent. I wasn’t worried at all. … I’m happy that I was able to heal pretty quickly.”

Maybe quick enough to play some center, even though Kyle O’Quinn is expected to start, while Hernangomez is down.

“Could see KP at the center. Maybe [Marshall Plumlee] will get some minutes there,” said coach Jeff Hornacek. “It’s possible.”

Hornacek rated Hernangomez as “probably a doubtful — he twisted it pretty good, it’s pretty swollen.” But the coach stressed players have returned quickly from such dings before. He was more hopeful about Porzingis.

“We’ll see how he responds [Wednesday]. He was able to go up and down. It was good for him to … test it out and feel it so he’s hopeful for [Wednesday],” Hornacek said.

Brandon Jennings, assuming he clears waivers, is expected to sign with Washington on Wednesday, according to the Vertical.

The Wizards have been trying to upgrade their bench, which ranked 29th in scoring. Last week they acquired Bojan Bogdanovic from the Nets.

The Knicks waived Jennings Monday when they brought back Chasson Randle.

“It’s tough. Brandon was a big part of the team, not only on the court but in the locker room,” Porzingis said. “He’s a great veteran, great guy. But you could tell that he wasn’t himself lately so that’s probably the best thing for him.Because he loves basketball, he loves playing basketball, he wasn’t happy here.”

Randle worked out Tuesday and Hornacek said it’s possible he could play in Orlando.

“He’s at the point-guard spot. We’re looking at Ron [Baker] also there and Ron does a lot of good things. There’s only so many minutes there but if it’s a guard that maybe Ron’s having trouble with for whatever reason, Chasson will get in there. So I guess it depends on the situation,” Hornacek said.

Hornacek eased up on guys who played heavy minutes Monday including Carmelo Anthony, Derrick Rose and Lance Thomas, who played in his fifth game after missing nearly a month with an orbital bone fracture.