Will somebody please tell Lonzo Ball's dad to mellow out?

CaptionCloseLaVar Ball, the boastful father of standout UCLA guard Lonzo Ball, already has gotten the reputation of being college basketball's most loutish parent.   Earlier this month, Ball proclaimed during the broadcast of a UCLA game that his... 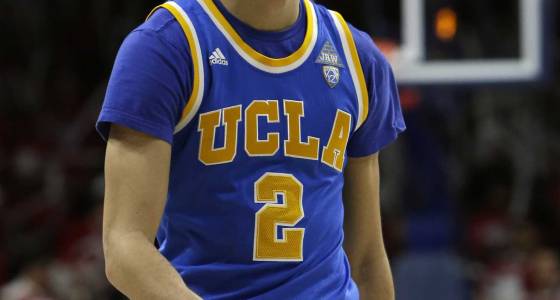 LaVar Ball, the boastful father of standout UCLA guard Lonzo Ball, already has gotten the reputation of being college basketball's most loutish parent.

Earlier this month, Ball proclaimed during the broadcast of a UCLA game that his eldest son already was better than two-time NBA MVP Steph Curry.

Lonzo Ball's dad repeats his idea that his son is better than Steph Curry.

Late last week, Ball's dad said his son "would only play for the Lakers," before clarifying that he wanted his boy to play for Magic Johnson's team.

"All I said was that my boy is going to play for the Lakers, and I'm going to speak it into existence," LaVar Ball told ESPN.

The elder Ball added more bombast during a visit with ESPN Radio in Los Angeles Monday morning when he predicted that his son will be the first player drafted into the NBA "with his own brand."

During his appearance, he said that if Lonzo "doesn't sign with Adidas, Nike or Under Armour, whoever, guess what? I'll sign the Big Baller Brand."

Lonzo Ball is expected to be one of the top picks in the upcoming NBA Draft. It's led his dad to proclaim that potential sponsors are "kicking in the door" to be associated with him.

"They're shocked at what I'm telling them. I said, 'I'm not looking for no endorsement deal. I'm looking for a marketing and distribution deal.' Co-branding. The only person doing that is (Michael) Jordan with Nike. That's what we're for," Ball said.

Amazingly, Ball's father has helped him single-handedly turn around the recent trend of little sizzle in college basketball.

Ball will enter the upcoming NCAA Tournament as the sport's most well-known player. He's already dwarfed what most one-and-done players have been able to accomplish during their college careers -- before his tournament has even started.

But as former NBA player Kenyon Martin said earlier this week, his dad isn't winning many friends with his statements.

"His dad is writing a check that his son might not be able to cash," Martin said on "Speak for Yourself" on Fox Sports Network. "He's a good player. But he's a kid. Don't put him in a situation he might succeed or might not."

And if Lonzo's Ball's development isn't enough to turn college basketball on its collective ear, younger brothers LiAngelo and LaMelo Ball will have their chance at UCLA in the future. Both are playing for Chino Hills (Calif.) High School. LaMelo Ball went for 92 points in a game last month.

Which means more hyperbole will no doubt be coming from their father in future seasons.