Will Muschamp 2.0 is off to a great start at South Carolina

Will Muschamp's arrival at South Carolina a little more than a year ago was greeted with a healthy dose of skepticism nationally.Looking back on it now, it felt like a sea of raised eyebrows and a steady wave of groans when his hiring was announced. There... 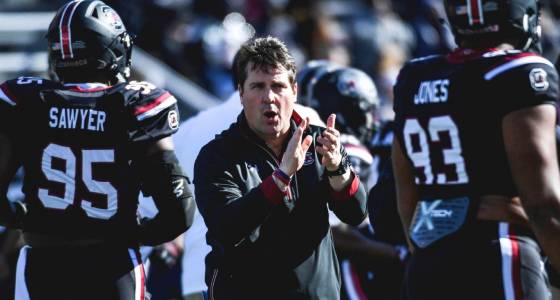 Will Muschamp's arrival at South Carolina a little more than a year ago was greeted with a healthy dose of skepticism nationally.

Looking back on it now, it felt like a sea of raised eyebrows and a steady wave of groans when his hiring was announced. There was possibly some quiet booing in the back.

Here was a guy who had been fired by Florida after four seasons and had spent only one year in between as Auburn’s defensive coordinator in which he helped it go a mediocre 6-6 during the regular season. He was seen as South Carolina’s backup when Kirby Smart went to Georgia and the backup’s backup when Justin Fuente signed on with Virginia Tech.

At SEC media days, Muschamp acknowledged his somewhat quick return to being a head coach, but pointed out that one-third of coaches in the NFL had been fired at one point in their careers.

“Why?” he said. “Well, because general managers are making the hire. They’re the ones making the decision in their football team, so they’re able to evaluate a situation and say, ‘You know what? Maybe it’s going to be different.’ You look at the circumstances and things that happen.

“I got hired by a coach [athletic director and former baseball coach Ray Tanner]. ... I got hired by a guy that sees those kinds of things, that had a conversation about my third year at Florida when he lost five or six guys for the entire season that are playing in the National Football League. And he brought that up to me. So, obviously, he did his due diligence.”

But not many people shared Tanner’s vision of Muschamp leading South Carolina at the time. The program had been drained of the talent that Steve Spurrier used to lead the Gamecocks to an SEC East title and three 11-win seasons, and many coaches wondered whether it had become the least desirable roster in the conference. The media ultimately picked South Carolina to finish last in the division, behind Vanderbilt and Missouri.

That, as it turns out, was a mistake.

Not only did South Carolina finish ahead of Vanderbilt and Missouri, it also beat preseason East favorite Tennessee, won six games and became bowl-eligible. In the process of doing so, we saw the beginnings of what appears to be a promising second act of Muschamp’s career.

Rather than being known only as the hot-tempered "Coach Boom" who never lived up to expectations at Florida, we were reminded of the smart young coach whom Nick Saban groomed at LSU, Mack Brown labeled Texas’ head coach in waiting and Jeremy Foley hand-picked as the man to succeed Urban Meyer at Florida. And he did it all with more freshmen (52) on the roster at South Carolina than juniors and seniors combined (37), while tying for the most true freshmen to start a game in the FBS (seven).

What’s more, Muschamp’s offense, supposedly his Achilles' heel, proved to be the most promising development.

Bryan Edwards had the second best season by a freshman wide receiver since Alshon Jeffery and Rico Dowdle became the first rookie to lead the team in rushing since Marcus Lattimore. Jake Bentley, who arrived on campus a year early after skipping his senior season of high school, started the final seven games, throwing for 1,420 yards, nine touchdowns and four interceptions to make South Carolina the only school in the country with a freshman to lead the team in rushing and passing.

Sophomore Deebo Samuel had 783 yards receiving despite missing three games, and fellow second-year player Hayden Hurst had the most productive season by a tight end in school history with 48 catches for 616 yards.

It’s only a start for a team that has a long way to go on both sides of the ball to compete with Florida and Georgia for the top of the division. But it’s a good start nonetheless.

Muschamp, of course, is taking nothing for granted.

“Our goals don’t change,” he said when asked to compare his outlook. “We want to win the East. That’s what we want to do.”

And in order to get there, some things have to change.

“It was a disappointment to put that on the football field,” he said. “Call it like it is. Physical is a state of mind, and we have to continue to buy into that.”

In one breath, he said he was pleased with the return of talented linebacker Skai Moore from injury. But next, he singled out redshirt freshmen Stephon Taylor, Kobe Smith and Aaron Thompson as players who must step up on defense.

“A huge part of our success is going to be how those three guys come on for us,” he said.

If Muschamp’s stated goal was to create adversity within the program to make for a more mentally and physically tough team, that statement was a good start.

South Carolina, despite last season, is still young and needs a big influx of talent. It will still be picked to finish near the bottom of the East. And Muschamp is still going to harbor his fair share of doubters.

Exceeding expectations was nice, but for the Gamecocks to get back to competing for divisions and Muschamp's second act of his career to be successful, last season can only be the beginning.