Why the Celtics stood pat, for now

Through luck and expert foresight, Boston earned the right to be choosy at the trade deadline Thursday. The Celtics are 37-20, second in the East, sitting on a pick with a 25 percent chance of ending up No. 1 in the entire stinking draft. They can have max... 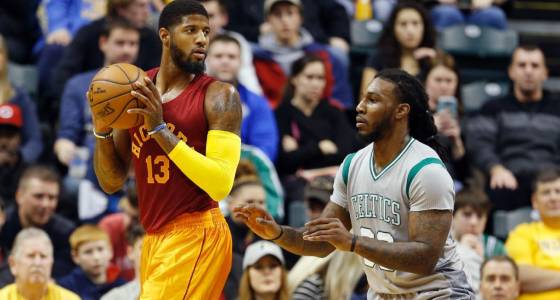 Through luck and expert foresight, Boston earned the right to be choosy at the trade deadline Thursday. The Celtics are 37-20, second in the East, sitting on a pick with a 25 percent chance of ending up No. 1 in the entire stinking draft. They can have max cap space this summer to chase Gordon Hayward, who famously played for Brad Stevens, Boston's coach, in college.

Few teams have been set up so well to do nothing. The Celtics negotiated off and on with Chicago and Indiana in search of workable megadeals for Jimmy Butler and Paul George. They could not come to a common ground with either team.

There is not much evidence, at least not now, that Indiana got close with anyone. Denver made a solid offer for George, roping in assets from a third team, per league sources, but the Nuggets were hesitant to part with Jamal Murray, sources say. (Nikola Jokic is rightfully untouchable.) The Pacers may regret this outcome. George can opt out after next season, and he's probably not going to make an All-NBA team this time around -- precluding Indy from offering him a mega-extension that would blow away anything rivals could dangle.

The Lakers threat to sign George in 2018 is very, very real. The Pacers will have limited means to jolt their roster in the interim, barring a huge surprise in free agency. Expect George talks to start again in the summer.2017 TRADE GRADES

Kevin Pelton hands out his grades for all of the NBA deals at the deadline.

Kevin Pelton hands out his grades for all of the NBA deals at the deadline.

Butler was more obtainable for Boston, and the two sides exchanged a bunch of proposals. The particulars are hard to pin down, but suffice it to say this: Boston could not find a package that left both its present and its future in a place that felt comfortable. Give up too much of the present, and you can't compete with the big boys. Toss every pick into the basket, and your contention timeline shrinks.

In the meantime, Toronto swooped in for both Serge Ibaka and P.J. Tucker, forming a deep, nasty, versatile team that should end up better than Boston even if the Raptors can't catch up in the standings. It feels like a missed opportunity for Boston to have some fun this season.

A package of Marcus Smart, Jae Crowder, and the Nets' 2017 first-round pick always seemed like a fair endpoint to the Butler negotiations. The two sides apparently never arrived there. It's unclear if Boston would have done that deal, anyway, and I can already hear everyone snickering at that -- at Danny Ainge's stubbornness, lording over the league's biggest stack of assets.

Boston was wary of losing both Smart and Crowder, even in exchange for Butler, who has been something like the ninth- or 10th-best player in the league this season. (David Aldridge has already reported Crowder was a sticking point in talks). Butler would have gobbled up all of Crowder's minutes at small forward, making it look like a wash. Smart is the price of doing business, and the Celtics would still have had plenty left over on the wing: Avery Bradley, Jaylen Brown, Terry Rozier, and more. They'd still have the 2018 Nets pick, a gem, plus future first-round picks from the Grizzlies and Clippers. The future would have been fine.

In talking with Chicago, the present may have worried them. They'd have Butler, but would the new Big Three of Thomas, Butler, and Al Horford be good enough to dethrone Cleveland and (gulp) Golden State? If not, what was the point? Swapping two wings -- Smart and Crowder, or Bradley and Crowder -- for one (Butler) would have chipped away at Boston's ability to go small. They would need to lean more on Brown, Jonas Jerebko, Kelly Olynyk (on fire right now) and other guys to fill minutes here and there. Brown isn't ready, and Jerebko and Olynyk aren't as good as Crowder.

Boston surely felt it needed to keep as many of its current core players as possible to compete with LeBron James; the Celtics may have even been willing to tilt their offers more toward the future, with a bundle of picks, to try and thread the needle of contending now and safeguarding the 2020s. (Such an offer would have provided Chicago an easier road map to a rebuild, which is what the goal should be in trading Butler.) Really, if they just kept one Nets pick, the future would be fine.

Chicago may have wanted too much of Boston's present for Ainge's taste, though the details of a fluid back-and-forth are hazy right now. Three sources directly familiar with the talks say they never got "serious," and that the Bulls did not appear motivated to move Butler and trigger a rebuild.

The non-deal speaks for itself: Boston couldn't find a balance it liked.

Boston's reluctance to offload Crowder and another veteran wing may have something to do with lack of size along the perimeter. Thomas is The Little Guy, and Bradley is undersized at shooting guard. Playing Butler with Crowder and Smart would add some beef and switchability. Losing Crowder in the deal would leave Butler and Brown as the only legit small forwards on the team.

Fitting Butler alongside Thomas would require more work and time than sliding George in. George is more useful than Butler off the ball -- a better shooter who works best as a high-volume second option. Butler is a bulldozer who likes to hold the ball and survey the scene. He's a career 33 percent shooter from deep, and opponents would be fine drifting away from him to clog the paint on Thomas.

They'd have made it work. Talent has a way of doing that. Butler is well-equipped to sustain the offense when Thomas sits -- a major problem for Boston right now. It's just not as simple a plug-and-play as it might have been with George.

But there is uncertainty in stasis, too. Here it is: Horford ages, Thomas demands a max contract, Bradley moves on due to salary constraints, Hayward stays with a damned good Utah team, and the young guys -- both on the team now, overseas, and in future drafts -- don't pan out as well as the Celtics hope. Or even if they do, it happens long after Horford, Thomas, Bradley, and even Crowder are past their primes. We are talking about literal teenagers.

Without an injection of star talent, Boston risks being good now and good later, but never great. Maybe adding Butler at the cost of Crowder and another starter would not have made them great now. It's popular to compare Big 3s, spot LeBron on the other side, and conclude yours is not good enough. You hear it all the time: Can Jimmy Butler be the best player on a championship team?

Well, who can? There is indisputable proof that like three or four guys in the entire NBA, if even that many, qualify for that status. The rest of the league can't just give up and wait until the Warriors part ways, or LeBron retires -- especially not this season, with the Cavaliers battling through serious injury issues that could hurt them in May. Get three or four top-25 players, including one borderline top-10 guy like Butler, maintain some depth, and hope you have the sort of chemistry and ferocity that lifts the team to a higher level.

It's not fair to label the Celtics as risk averse. They offered four picks for freaking Justise Winslow! They plopped a fair package in front of Chicago today. But they were going to do the deal on their terms -- even though they have enough assets to bend at least a little toward Chicago's terms.

These are not black and white, right or wrong decisions. They are probability plays. Boston sought team-level greatness now, and the Celtics didn't land on a deal that delivered it. They are confident in their odds of finding it later, through the draft, free agency, or some other trade that pops up. They coaxed Horford, and they might have even more cachet with the next batch of free agents if they actually win a playoff series. Nabbing Butler would have made it very hard -- and maybe impossible --for them to carve out max-level cap space again this summer.

Butler and George will be out there again, perhaps as early as the draft in June. The Celtics will get another crack, and the Bulls have time to pivot into a rebuild. Tom Thibodeau hasn't forgotten about his old shooting guard from Tomball, Texas. Crowder looks like a keep-things-afloat play for the drifting Bulls -- and probably is -- but he's on a crazy-good contract, and the Bulls could flip him for picks in a hot second. The Pacers will reach a point of clarity one way or another with George. Other stars will become available to Boston.

Trading for one of them is uncertain. Signing one in free agency is uncertain. The draft is uncertain. Lottery results are uncertain. Boston is confident it has the goods, and the smarts, to shift the odds in a friendly direction at some point -- that it can make its own luck.

Butler's stardom is certain, and Boston wasn't willing to meet Chicago's terms to acquire him. Maybe Chicago was never trading him anyway. I don't quite buy that. It seems ludicrous to spend time on the idea if you don't have a price point at which you say "yes."

The Celtics are fine. They are the envy of the league, really. They are a good team now, and they might pick in the top three of the next two drafts. That is insane.

But it guarantees them nothing. Getting Butler wouldn't have guaranteed them anything either, beyond the security of having him on the team. It's fine for Boston to have stood pat. These are hard choices. There are more coming. Boston has to get some big ones right.