FORT MYERS, Fla. -- Rick Porcello finishes his morning workout and heads into the visiting clubhouse at the Boston Red Sox's spring training complex. It's a quiet Tuesday in early March, but Team USA is passing through en route to Miami for the World Baseball... 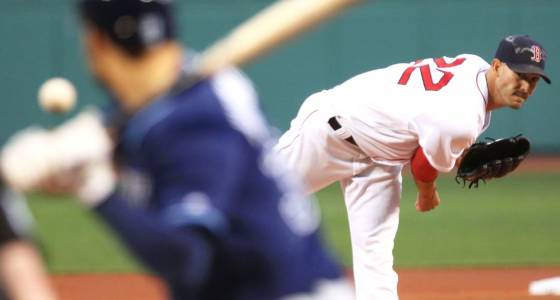 FORT MYERS, Fla. -- Rick Porcello finishes his morning workout and heads into the visiting clubhouse at the Boston Red Sox's spring training complex. It's a quiet Tuesday in early March, but Team USA is passing through en route to Miami for the World Baseball Classic and Porcello wants to catch up with Jim Leyland and Jeff Jones, his first manager and pitching coach, respectively, in the big leagues.

As he walks through the door, Porcello bumps into former Detroit Tigers shortstop and Team USA coach Alan Trammell, who offers his compliments to Boston's Opening Day starter on winning the Cy Young Award in November.

"What are you congratulating him for?" Jones shouts. "That was last year."

Jones is kidding, as only a pitching coach can with his erstwhile pupil, and everyone shares a laugh. But beyond the jocularity, there is a message. Porcello might seem like an unexpected Cy Young winner, but don't go thinking he's a one-year wonder.

After years as the fourth- or fifth-best pitcher in talented Tigers rotations led by Justin Verlander and Max Scherzer and also featuring Anibal Sanchez, Doug Fister, Drew Smyly and David Price, Porcello finally has emerged from their shadows. He's a full-fledged ace now, and to hear Jones tell it, this has been building from the moment Porcello made his major league debut as a 20-year-old in 2009.

"I always saw him as a guy that could be a top-of-the-rotation guy," Jones says. "The fact that he got to the big leagues so young, it took a little bit longer maybe for him to become that guy. But I think that could be a factor in why it took a little bit longer. Because he had to learn at the big-league level, for the most part. But there was never a time that I didn't think he was going to get better. As long as he stayed healthy, I always felt there was no ceiling for him."

There were years, though, when Porcello must have felt like a 6-foot-5 man in a 6-foot-high room.

"This is something that I had been trending towards and working towards, and there's no reason for it to stop."

Drafted 27th overall in 2007, Porcello flew through the minors, making the Tigers' roster in 2009 despite pitching only 125 innings in A-ball. But while many phenoms, including Price with the Tampa Bay Rays and new Red Sox teammate Chris Sale with the Chicago White Sox, break into the big leagues in a relief role, Porcello went directly into the rotation and finished 14-9 with a 3.96 ERA in 31 starts. Leyland even trusted him to start a tie-breaker for the AL Central crown on the road in Minnesota.

Something else set Porcello apart from Price, Sale and most other aces-in-waiting too. He didn't light up the radar gun. Porcello succeeded by sinking his fastball and inducing weak contact, not by blowing it by anybody.

Porcello always had a good changeup and made a constant effort to improve his third pitch, focusing one year on his curveball, the next on his slider, eventually developing a cutter. But the low-90s sinker was his signature, and he often fought the urge to throw harder, a product of his insecurity that he could keep relying on a pitch that isn't overpowering.

"It seemed like the lower his velocity was, the more his ball sank," Jones says. "There were times he would throw 94-95 and his ball really didn't sink much. I think he had to figure out, what speed do I need to pitch at in order to get the good sink on my fastball?"

Porcello also had to figure it all out in the big-league spotlight. He regressed in 2010, even getting demoted to Triple-A for a month in the middle of the season. Over the next three years, he seemed to plateau, eating up innings but posting ERAs of 4.75, 4.59 and 4.32.

Opening Day is finally here. Get ready for a new MLB season now!
Ultimate guide to the 2017 season »
Power Rankings: Cubs on top »
Team predictions » | Awards »
Why your team won't win the World Series »
What's next for the Cubs? »
Can the Indians recover from Game 7? »
Insider: Team betting previews »
Complete season preview »

"David and Chris, they were pretty sharp from the get-go all the way through," Porcello says, referring to Price and Sale, his fellow Red Sox aces. "They've made adjustments and whatnot, but they've had really, really fantastic careers from start to finish, up to this point. Where my career is different from theirs was I hit some speed bumps coming to the big leagues at a young age and not quite understanding myself and knowing how to pitch."

Says Red Sox president Dave Dombrowski, then the Tigers' general manager: "He won 14 games his rookie year at a young age, but he was not fully developed with his repertoire at that point. He needed to add some offspeed stuff. He really won with his sinker. And so, he's had to learn how to pitch at the big-league level, which isn't easy. Sometimes he wasn't quite ready to take that next step."

It all clicked by the middle of the 2014 season. Having finally settled on a pitch mix he felt comfortable with, Porcello tossed back-to-back shutouts of the Texas Rangers and Oakland A's, part of a 24-inning scoreless streak that Jones identifies as the point when Porcello "knew that he was a quality big-league pitcher."

Anticipating the Tigers couldn't afford to re-sign Porcello when he reached free agency, Dombrowski traded him to the Red Sox after the 2014 season for All-Star outfielder Yoenis Cespedes. Sure enough, all the old insecurities rushed back. The Sox lacked a proven ace, and in conferring upon Porcello an $82.5 million contract extension, then-GM Ben Cherington made clear they expected him to eventually lead the rotation. Instead, Porcello lost his way in 2015, finishing July with a 5.81 ERA.

"It happens with a lot of guys -- they go to another team, whether it's at the trading deadline or over the winter, and they try to do a little bit too much sometimes," Jones says. "Guys want to prove they're worthy of the trade or they're worthy of the contract they just signed. Ricky has never really said that to me, but I think that's exactly what happened."

Just as in 2010, Porcello took a step back. He landed on the disabled list, made a rehab assignment in Triple-A, then returned to the Red Sox more relaxed and self-confident. He posted a 3.14 ERA over his final eight starts, a prelude to the breakthrough season that Jones always knew was possible.

After going 22-4 with a 3.15 ERA and setting career highs with 189 strikeouts and 223 innings, Porcello became the Red Sox's first Cy Young winner since Pedro Martinez in 2000. Fittingly, he edged out Verlander for the award, which was won by Scherzer in the National League, symbolic of Porcello stepping out of his ex-teammates' long shadows.

But as Jones says, enough about last year, especially since there might be other stellar seasons to come.

"He's become an elite pitcher," Jones says. "He's done everything necessary to get to where he's at right now. It's not really a big surprise to me, honestly."

Says Porcello: "This is something that I had been trending towards and working toward, and there's no reason for it to stop."