DENVER — While getting a first-round pick without dealing Brook Lopez will get the headlines, plucking K.J. McDaniels without giving up essentially anything might have been general manager Sean Marks’ shrewdest move in his first trade deadline. With loaded... 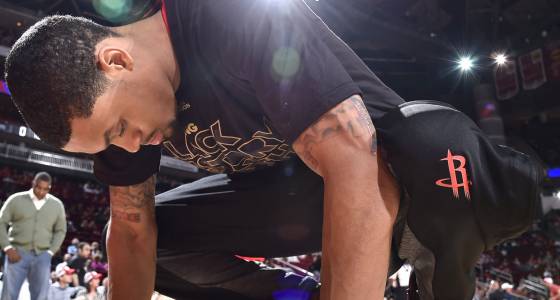 DENVER — While getting a first-round pick without dealing Brook Lopez will get the headlines, plucking K.J. McDaniels without giving up essentially anything might have been general manager Sean Marks’ shrewdest move in his first trade deadline.

With loaded Houston needing cap relief for a win-now mode, Marks swiped McDaniels for the cash, which the Houston Chronicle reported was just $75,000. The young, athletic 6-foot-6, 205-pound swingman joined the team in Denver for shootaround but did not play Friday. Despite a shaky jumper he has athleticism, defensive tenacity and potential for coach Kenny Atkinson to mold.

“To get a free shot at a guy like K.J. that other teams have liked around the league for whatever reason, we’re lucky enough that he fell in our lap,’’ Atkinson said before the Nets’ 129-109 blowout loss to the Nuggets on Friday night. “His athleticism, his ability to finish at the rim, how hard he plays defensively, he can be a good fit for us. I’m excited for him.”

Houston gave McDaniels a three-year, $10 million deal in the summer of 2015, but this year he logged just 212 minutes for a loaded 41-18 Rockets team. Needing to clear cap room, the Rockets nearly dealt him to Cleveland for Mike Dunleavy Jr. before pulling out of the deal. Instead, they ended up with $3.5 million in cap room, and the Nets got wing potential for next to nothing.

“I felt like it’s a great opportunity for me. It’s a new beginning on my journey in the NBA, and I’m excited,’’ McDaniels said “I feel like there’s always room to improve. I felt like with the opportunity I’ll be able to go out there and show Brooklyn what I do, and play both ends of the court and just try to bring energy.

“Everyone knows I’m athletic. I’m basically just working on my game, get my IQ up, and focusing on [improving my] shooting, playing defense, being a tick on the defensive end, being in everybody’s grille. Just expanding my game.”

McDaniels, 24, is averaging just 2.8 points and is a career 29.2 percent shooter from 3. But his 45.6 percent from the floor, 33.3 percent from deep and 90.0 percent from the free-throw line this year are all career-highs. The former ACC Defensive Player of the Year will get playing time on a rebuilding team that dealt away small forward Bojan Bogdanovic, who led them in starts and was second in minutes.

With Bojan Bogdanovic traded, rookie Caris LeVert got just his second career start, finishing with 10 points on 4-of-9 shooting and two assists.

Spencer Dinwiddie had eight points, five assists and four boards while Isaiah Whitehead added 12 points, both off the bench. With Jeremy Lin back, Atkinson said both young point guards will play more off the ball.

“You have multiple pick-and-roll ballhandlers, which is a help. Then you throw Caris out there, and you have three. That’s hard to guard. I’m definitely going to experiment with that as the season finishes here,’’ said Atkinson, adding that Lin will play both ends of the back-to-back, meaning he will face Golden State on Saturday.