Why Rex Ryan wore a Chargers shirt that fueled rumors

For the first time since 1998, Rex Ryan is without a job in the NFL. Every head coaching vacancy has been filled for weeks, there are no openings for defensive coordinators, and it appears likely that he’ll spend the 2017 season watching from the sidelines... 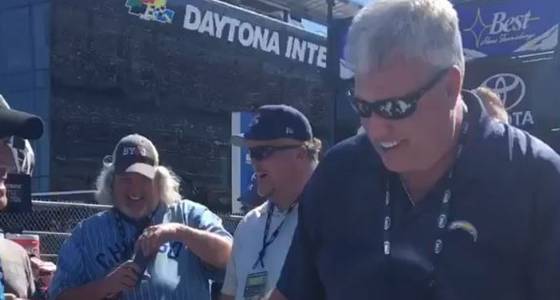 For the first time since 1998, Rex Ryan is without a job in the NFL. Every head coaching vacancy has been filled for weeks, there are no openings for defensive coordinators, and it appears likely that he’ll spend the 2017 season watching from the sidelines (perhaps from the booth) rather than coaching from one.

As a result, he’s spending his first free offseason by making the rounds in other sports. After visiting the Yankees’ spring training facility, Ryan showed up at Sunday’s Daytona 500. His attire was, well, interesting.

Why exactly would Ryan be wearing a Chargers polo? One theory would suggest it’s a sign of things to come with him possibly joining their coaching staff. Only, their staff has supposedly been finalized, throwing a wrench in that speculation.

Ryan seems to be enjoying his offseason, which is likely to be his first without the NFL.