Why Jeremy Lin thinks Nets’ break can be a ‘turning point’

SAN FRANCISCO — The NBA schedule — play, recover, play, recover — leaves little time for practice. Or in the last-place Nets’ case, little time to work on the fundamentals and principles they so desperately need.That changes this week. Brooklyn will... 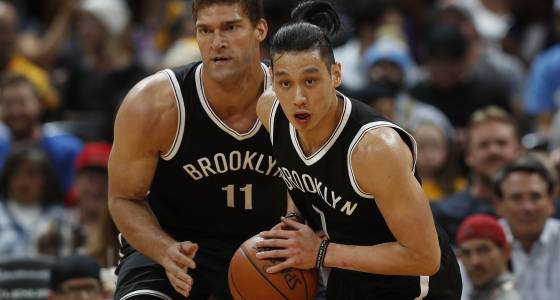 SAN FRANCISCO — The NBA schedule — play, recover, play, recover — leaves little time for practice. Or in the last-place Nets’ case, little time to work on the fundamentals and principles they so desperately need.

That changes this week. Brooklyn will have its longest stretch between games all season, enjoying a day off in the Bay Area on Sunday and then coming back with two lengthy practices Monday and Tuesday before trying to break an NBA-long 16-game losing skid Wednesday just up the road in Sacramento.

“It’s really big,’’ said Jeremy Lin, now two games into his return after missing 26 straight games with a hamstring injury. “We barely get any time to practice, so this is going to be really big for us to get back to our fundamentals, our principles. And I think if we do it right, hopefully it can be somewhat of a turning point in terms of turning things around and getting things headed in the right direction.”

It’s hard to imagine things going further in the wrong direction. But this being the Nets, it’s always possible.

After dropping the first two games of this eight-game road trip, they have lost 16 straight. Losses in Sacramento and in Utah on Friday would match a dubious team record, set in their final season in the Meadowlands.

It’s a record they’d rather not break, which is why coach Kenny Atkinson plans to put them through a mini-boot camp.

“We’ve got to get back to work. We’ve got to be a little bit like in training-camp mode, without burning our guys out. They had a while off at the All-Star break. We’ll have two good days to get shortened training-camp practices. I think it’s important. Our guys need it. I’m looking forward to it.”

That’s the worst record in the history of a franchise with a lot of poor records. The Nets’ .146 winning percentage that season is tied for seventh worst in league history, and their current .155 is ninth.

With Atkinson having rued the fact they haven’t had sufficient time to properly drill principles on both ends of the court — either offense or defense invariably suffering, depending on which was focused on — Monday and Tuesday could be huge.

“They’re very important,’’ said Brook Lopez. “We have the opportunity to come in and [work]. That’s not really the case, the way the schedule is in today’s NBA. You play so many games, day off, then another game. There are two or three days we have a chance to come in get a really physical good aggressive practice in.

“We’re going to be on the road for awhile, so we just have to continue to believe. We can’t let go of the rope. Again, I think if we play with the mentality we had against [Golden State], we’ll be all right. We have to just — regardless of who we’re playing — act like we’re playing the best team in the league.”

Atkinson expected to get an update on injured forward Quincy Acy on Sunday and hopes to get him integrated back into the team soon. … St. John’s coach Chris Mullin, a former Warriors star, will film a walk-and-talk through Central Park with Stephen Curry for ESPN when Golden State is in New York City next week.