Why all eyes will be on Sidney Crosby on Saturday

The Philadelphia Flyers and Pittsburgh Penguins will face off in the Stadium Series at Heinz Field on Saturday (8 p.m. ET on NBC).It will be the Penguins’ fourth time playing outdoors, tying them with the Detroit Red Wings for the second-most outdoor... 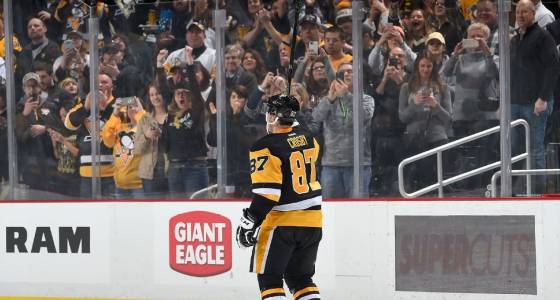 The Philadelphia Flyers and Pittsburgh Penguins will face off in the Stadium Series at Heinz Field on Saturday (8 p.m. ET on NBC).

It will be the Penguins’ fourth time playing outdoors, tying them with the Detroit Red Wings for the second-most outdoor games played in the NHL. The Chicago Blackhawks have played in five.

The Flyers are playing in their third outdoor game. Philadelphia and Pittsburgh are a combined 1-3-1 outdoors.

Sidney Crosby and Evgeni Malkin are the only Penguins who have played in all three of the team’s previous outdoor games. Crosby has been the focal point in those games.

Snow during the first edition of the Winter Classic (and the NHL’s second outdoor game) made for outstanding visuals for the 71,217 fans in Buffalo.

The Penguins and Buffalo Sabres battled to a 1-1 tie through overtime, setting the stage for the shootout. Crosby would score the shootout winner for the Penguins.

Eric Fehr upstaged everyone on the scoresheet in this game with two goals in the victory for the Washington Capitals.

But the game will be remembered for the blindside collision between Crosby and Washington’s David Steckel toward the end of the second period. “He got my head, for sure,” Crosby said. “But I can't comment on it. I don’t even know. Maybe it was so far behind the play the officials didn’t see it.”

Crosby would finish the game and play four days later against the Tampa Bay Lightning, a game in which he was hit again in the head, by Victor Hedman. Crosby would not play again until Nov. 21 of the next season because of concussion symptoms.

Six days earlier, Crosby and Jonathan Toews were teammates as they helped Canada win a gold medal at the 2014 Winter Olympics.

At Soldier Field, Toews was the No. 1 star with two goals and an assist as the Blackhawks won a game that featured heavy snowfall for most of the contest.

The Penguins have scored exactly one goal in regulation/OT in each of their three outdoor games.

Heinz Field will join Yankee Stadium as the only venues to host two outdoor NHL games.

According to Accuweather, the high temperature in Pittsburgh for Friday was forecast to be 78 degrees. However, by the time the game is scheduled to start on Saturday, the temperature should be 39 degrees with overcast skies.

The last time the Penguins played outdoors at Heinz Field, rain was an issue, delaying the game from the afternoon to an evening start.