Who were this week's BPI winners and losers?

Teams that have hurt themselves: Kansas State, Gonzaga, MarylandTeams that have helped themselves: Providence, SMU, ArkansasWith just less than two weeks to Selection Sunday, every men’s college basketball team is trying to either earn their way into... 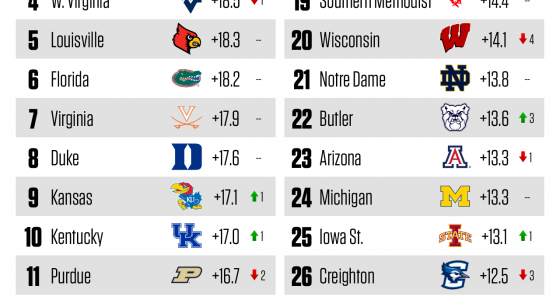 Teams that have hurt themselves: Kansas State, Gonzaga, Maryland

Teams that have helped themselves: Providence, SMU, Arkansas

With just less than two weeks to Selection Sunday, every men’s college basketball team is trying to either earn their way into the tournament, or prove that they deserve a top seed. Games over the last week provided teams with the opportunities to do just that. Some team’s took advantage of those opportunities and some did not. The Basketball Power Index (BPI) – which measures how good a team is looking forward, and Strength of Record, which measures how impressive a team’s win loss record is, can be utilized to not only provide those pieces of information, but also to simulate the rest of the season, tournament seeding, and the tournament itself. The results of this week’s games, along with the window into the past and future provided by the metrics, allows us to see some of the biggest winners and losers of the week.

After upsetting the University of Houston on the road last week, SMU took their 20th BPI ranking into their only game of the week: a road game against 84th ranked University of Connecticut. BPI gave SMU a 72 percent chance to win that game on the road, and projected they would win by five to six points. SMU won and boosted their SOR to 19th as well as increasing their odds of winning the American Conference tournament to 37 percent.

Providence followed an impressive week in which they beat higher ranked teams Butler and Xavier with two more good wins against Creighton on the road and Marquette at home. These wins have boosted Providence’s tournament prospects significantly. Their current SOR of 44 suggests that they have 62 percent chance to make the tournament – up from just 50 percent before their win over Marquette.

The rough week for Kansas State began with a loss at home to Oklahoma State in which BPI favored them to win by three. They followed that with a loss on the road to 77th ranked Oklahoma in which they were favored to win by 2. They were 33rd in BPI going into the week and have now slide to 42, but worse, their odds to make the tournament have fallen to 14 percent – despite being 39 percent before the Oklahoma game.

Gonzaga spoiled their perfect season by dropping a home game to 73rd ranked BYU at home – when they were favored to win by nearly 26 points. While the loss certainly does not affect their odds of making the tournament, and while a perfect season is a great story, dropping one game – even an eminently winnable one like BYU – is understandable. But it will cost them in their chance to grab a top seed in the tournament. Going into the game against BYU, BPI had Gonzaga at one and with a 91 percent chance of a number one seed. The loss dropped them to third in BPI, third in SOR, and only a 46 percent chance to grab a top seed.

Maryland’s record has exceeded the expectations of their BPI ranking all season, but that seems to be slipping recently. Maryland was 40th in BPI going into a week in which they had two home games BPI game them a 70 percent chance to beat Minnesota, and an 84 percent chance to beat Iowa. They lost both games, however, by a combined 28 points, pushing them down to 49th overall in BPI and behind such teams as Minnesota and Miami in SOR. They were 40th in BPI and 17th in SOR going into the week, and now sit at 49th and 29th meaning that they may have cost themselves significantly in seeding for the tournament, for example, if the tournament were seeded by SOR alone, they would have gone from a four or five seed a week ago to a seven or eight seed this week.