Who should Georges St-Pierre face in his return fight?

What a difference four months can make.Editor's PicksHow every UFC fight ended in 2016How many UFC fights over the past year ended in a knockout? How many went the distance? We break down every result of 2016.White: St-Pierre's long-awaited UFC return officialOne... 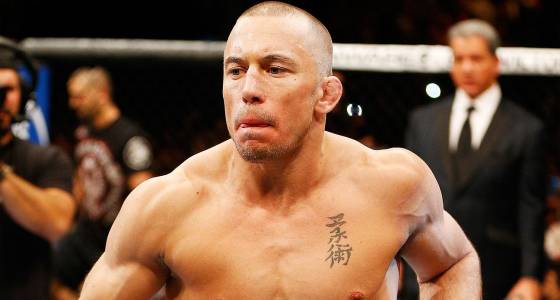 What a difference four months can make.

How many UFC fights over the past year ended in a knockout? How many went the distance? We break down every result of 2016.

One of the biggest draws in UFC history is coming back. Dana White told the LA Times on Friday that former 170-pound champion Georges St-Pierre has signed a deal to return to the UFC.

Georges St-Pierre's attorneys maintained that the star fighter was able to terminate his deal because the UFC breached contract by not offering him a fight.

Last October, mixed martial arts superstar Georges St-Pierre defiantly announced he had terminated his exclusive contract with the UFC and considered himself a free agent. The UFC immediately released a statement that refuted St-Pierre's claims.

But earlier this month, UFC president Dana White told the Los Angeles Times the two sides had officially reached a deal to bring St-Pierre (25-2) back into the Octagon in 2017.

St-Pierre will emerge from a quasi-retirement that began in late 2013, and as one of the most talented (and popular) athletes in the sport's history gears up for his comeback, you can imagine there is no shortage of opponents for him.

So, who should the former welterweight champion face when he returns to competition later this year? We've got your answer right here.

He should not fight middleweight champion Michael Bisping, although that seems quite possible.

And in plenty of ways, it does make sense. If you're Bisping (30-7), of course you want this fight. It's the most lucrative matchup out there (by a mile) -- and the alternative is a title defense against a wrecking-ball challenger in Yoel Romero. Romero doesn't have St-Pierre's resume, but he's a full-size middleweight and a more dangerous opponent for Bisping.

There's a lot to like if you're St-Pierre, too. Immediately, it's a shot at history. St-Pierre would become the fourth fighter to ever win UFC titles in multiple weight classes. And no disrespect to Bisping, but St-Pierre probably likes his chances against him. No doubt he likes them more than if it were Romero or someone like Luke Rockhold at the top.

White has already mentioned this as a possibility. St-Pierre's coach, Firas Zahabi, has been talking about it for months. Bisping even announced he had verbally committed to do it in December, but that was before St-Pierre and the UFC came to a deal.

Financially, this is a great route. St-Pierre returning with a move up in weight and a shot at a second belt? Against an opponent in Bisping who knows how to work the mic? The UFC could sit back and watch the money roll in on this one.

The problem is that as much as St-Pierre deserves any opportunity he gets, this title shot belongs to Romero. And to go one step further, it also belongs to Ronaldo 'Jacare' Souza, who has been outstanding in recent years. Bisping was already in a nostalgic title defense that turned a blind eye to rankings, against Dan Henderson in October.

MMA always teeters on the line between sport and entertainment. In this instance, I'd prefer it to lean sport and have Bisping defend the title against Romero.

He absolutely should not fight lightweight champion Conor McGregor.

There is an outstanding interim lightweight title fight at UFC 209 this weekend between Khabib Nurmagomedov and Tony Ferguson. The winner needs to fight McGregor next.

As great as McGregor has been -- and he has been truly magnificent -- there's a strong case to be made he's not the best lightweight in the world. Even though the UFC title is in his possession, the jury is out on whether McGregor is better than the undefeated Nurmagomedov or the surging Ferguson. That's a matter I'd love to see settled.

Back-to-back fights against Nate Diaz at 170 pounds provided strong indication McGregor would be vastly undersized against natural welterweights. Is he capable of fighting at that weight? Sure. But it's unnecessary. He's in the prime of his career, in the sport's deepest division.

This fight would be compelling, but honestly, not as compelling as McGregor proving he's the best lightweight in the world against an opponent (either Nurmagomedov or Ferguson) that would represent a tough matchup.

St-Pierre's fame is built on facing the best of his era, in his own division. Let's see that from McGregor, too.

He could fight Anderson Silva. Finally.

For the longest time, this fight made both a ton of sense ... and very little at all.

Just by virtue of the two men dominating pound-for-pound rankings for years, it was only natural to want to see them fight each other. The hard-to-ignore problem was weight. St-Pierre is average size for 170 pounds. Silva's career has been at 185, but he has also looked quite at home at 205.

As badly as we all wanted to see this matchup, the size difference was hard to overlook. Especially for St-Pierre, who always seemed to have a (reasonable) hesitancy when he discussed his interest in it.

But Silva is in his early 40s now. And St-Pierre is coming back with, presumably, plenty of miles left -- but an interest that starts and stops in the biggest fights possible.

Although this would no longer determine the best fighter in the world, as it once could have, it probably makes even more sense now than it did before. It's a legacy fight now, with two icons who might be past their respective primes but not anywhere close to being finished. This is a good option for St-Pierre's comeback.

I guess he could fight Nick Diaz. But we've seen that already.

At the moment, this might be the only fight that gets Diaz back in the Octagon in 2017. His suspension for marijuana ended six months ago, and yet, no word on a return.

They fought in 2013, for St-Pierre's welterweight title. Diaz lost a pretty one-sided decision. There has been some bitterness detected in him about how that fight went -- some of it related to the regulatory oversight it received in St-Pierre's backyard of Montreal.

There's never a dull moment with Diaz and the clash of personalities between him and St-Pierre was (and would surely still be) pure gold. But the truth is, there are more compelling fights for each of them at the moment.

He should fight the winner of Tyron Woodley and Stephen Thompson for the welterweight title.

When St-Pierre walked away three years ago, he turned over a UFC welterweight title that had been firmly under his control for more than five years.

Think about the title fights this division has witnessed since. Johny Hendricks vs. Robbie Lawler. Lawler vs. Carlos Condit. Lawler vs. Rory MacDonald. Woodley vs. Thompson.

In the St-Pierre era, it was a division known for one-sided title defenses. Post-GSP, it has been back-and-forth warfare.

St-Pierre is already the greatest welterweight of all time. If he were to make his return to a competitive division, after stepping aside for three years, and immediately reclaim what he willingly gave up back in 2013? What a story that would be. It might never be topped at 170 pounds.

This option wouldn't sell as well as others, and that alone greatly hurts its chances. But, for my money at least, Woodley or Thompson is who St-Pierre should fight.