GLENDALE, Ariz. — Future White Sox closer Zack Burdi stood at his locker with a cherubic smile, sounding like a pitching prospect sent to the Sox straight from central casting, describing a happy childhood in Downers Grove that included witnessing favorite... 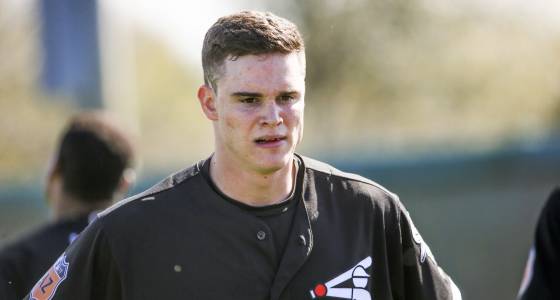 Burdi, a first-round draft pick out of Louisville in June, marveled at how, only one year after facing hitters from SIU Edwardsville, here he was wearing the uniform of the Sox team he grew up loving.

"A couple times this offseason I took a step back and realized how far I've come," Burdi said.

Taking one step back before preparing to make two forward — Burdi is an ideal spokesman for a Sox organization embracing its rebuilding process.

Make no mistake, the construction project at 35th and Shields will revolve around a collection of arms as live as Burdi's, which has been known to hurl a fastball 101 mph. It helped the right-hander ascend quickly through every level of the Sox minor-league system, from rookie ball to Triple-A, in the four months that followed the amateur draft.

"From June to September was crazy hectic," Burdi said. "But I've grown and matured from the experience."

Asking Burdi when he expects to experience his first major-league appearance produces nothing but a shrug. Burdi doesn't know or particularly care, trusting the people who drafted him to know what they're doing.

The question comes up often in a Sox clubhouse full of pitchers like Burdi headed to the majors sooner rather than later, representing the foundation on which the team will rebuild. According to MLB.com, seven of the Sox's top 10 prospects are pitchers. Enough youth exists to make 24-year-old lefty starter Carlos Rodon, beginning his third season, resemble the old guard.

Lucas Giolito, Michael Kopech and Reynaldo Lopez — ranked Nos. 2, 3 and 4 on the list — one day could appear in the Sox rotation in the same order. Don't forget 2015 first-rounder Carson Fulmer, all of 23, who comes in at No. 5. Then there is Spencer Adams (seventh), Burdi (eighth) and Dane Dunning (10th).

One day last week, as Burdi and Kopech simultaneously threw bullpen sessions on separate back fields, observers within earshot could hear the rhythm of both flamethrowers popping the catcher's mitt with the sounds of potential. So far, the camaraderie from having so many promising pitchers has outweighed any competition among them to get to Chicago quickest.

"We're so young and naive that it doesn't really hit us and all so level-headed and concerned with honing our craft that we don't see it that way," Burdi said. "We want the best for each other, to be able to grow individually and then as a group."

The growth of that group supersedes anything that happens to a Sox team staring at 90 losses, a reality general manager Rick Hahn refreshingly now grasps. Any improvement in the minors by Yoan Moncada, baseball's No. 1 prospect, and Zack Collins, the 10th pick in June, matters more than the execution of the Sox's opening-day second baseman and catcher. Welcome to the 2017 White Sox, who could place signs around Guaranteed Rate Field that say, "Pardon Our Dust, Renovation in Progress."

"We're all competitive by nature but we have to alter the mindset a little," Hahn said. "We have to pivot from just evaluating our progress at the big-league level. Part of taking a longer-term view and building something sustainable is knowing the process going into the pregame prep and scouting and teaching and holding players accountable."

Photos as the White Sox practice at spring training at Camelback Ranch in Glendale, Ariz.

When Hahn hinted late last season that the Sox's first couple of offseason moves would signal the team's direction, everybody assumed he meant a blockbuster trade like the Chris Sale deal. But Hahn revealed the telltale moves came earlier in hiring manager Rick Renteria and promoting Curt Hasler and Nick Capra, coaches experienced in player development, to Renteria's major-league staff. An organization committed to teaching first needs proven teachers in its baseball classroom.

"It's not very sexy," Hahn said. "But it's all part of the organizational rebuild, these under-the-hood changes which take time to manifest themselves at the big-league level."

Hahn chuckled when asked if that bought him more time in a sports city where scrutiny comes with every GM job in town.

"I don't view the pressure on me as an individual differently than I did a year ago, two years ago, or likely will in three years," Hahn said. "We are trying to build something sustainable, and while I want to show progress, I want to add to the 2016 draft with another quality one. I want to add to the talent internationally and continue to make trades similar to the ones we made this offseason."

Good, because it behooves the Sox for Hahn to feel pressure to keep dealing. He must be just getting started. A general manager truly committed to starting over will find a way to trade commodities Jose Quintana, David Robertson, Todd Frazier and Melky Cabrera by the All-Star break. The Sox need to acquire more highly ranked position prospects to complement their pitching depth.

The standings won't measure the Sox success this season. The transactions will.