Whicker: Wobbly USC must figure it out down stretch

TEMPE, Ariz. – The people started leaving Wells Fargo Arena with 3:55 left, as if there was a crowd to beat.Arizona State had fought the good fight and shot the good shot and now watched USC’s Chimeze Metu slam his way to a 10-point Trojans lead.... 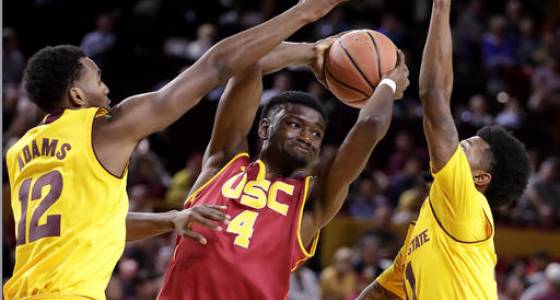 TEMPE, Ariz. – The people started leaving Wells Fargo Arena with 3:55 left, as if there was a crowd to beat.

Arizona State had fought the good fight and shot the good shot and now watched USC’s Chimeze Metu slam his way to a 10-point Trojans lead.

Inevitability had arrived. ASU’s Torian Graham, the Pac-12’s second-leading scorer, was in the process of going 2 for 12. The Trojans had finally policed the area.

What happened next was February Madness.

As the final seconds slipped off the clock, Bennie Boatwright had an open shot to wipe away Arizona State’s astonishing one-point lead.

It wasn’t, and the Sun Devils won, 83-82, extending USC’s losing streak to four and stunning fans who, refreshingly, didn’t even know how to storm the court.

Coach Andy Enfield recited the positives, but when asked if USC could feel secure about an NCAA Tournament bid, he said no.

“If we lose the rest of our games all year we’re not going to the tournament,” he said. “But I’m not concerned about that right now.”

What matters is that the Trojans need a confidence tuneup after losing close to Oregon, badly at UCLA, fairly routinely at Arizona and now this.

They scored one of a possible four points from the free-throw line down the stretch. Metu fouled while trying for an offensive rebound. Boatwright threw the ball away.

But the Trojans still led by six with half a minute to go.

A drive by Tra Holder and an improbable, fadeaway 3-pointer by Kodi Justice with 14 left sliced the lead to one.

Enfield called time. Boatwright, under the basket, looked for point guard Jordan McLaughlin in the middle of the lane.

They missed connections, and when Holder stole the ball and drove, Boatwright fouled him. He shook his head, and Holder hit both foul shots with 6.9 seconds left.

Then Boatwright, who had hit 8 of his previous 11 shots and scored 22, missed his redemptive try at the end.

“I didn’t see anybody open so I was counting down (the 5-second count) in my head,” Boatwright said. “I thought Jordan was cutting back. It’s a mistake. I’ll take the blame for this one.”

“Jordan was trying a double move,” said Elijah Stewart, who defended Graham well but missed the front end of a one-and-one during the collapse. “He made the first move and that’s when the ball came.”

Until the flood, the Trojans were putting together a workmanlike win. They hassled ASU into 3-for-12 shooting from 3-point land in the second half. Metu was strong throughout, and Boatwright wound up with 22 points.

Nobody really thinks USC is in danger of falling out of the 68-team NCAA matrix, considering how many bedraggled teams are in consideration.

And this was USC’s first loss to a team that lacks all tournament hope. The others were to the Pac-12’s Big 3, then Utah and Cal.

But the selection committee frowns upon teams that cough their way to the finish line, and USC has a weak nonconference schedule rating.

The committee also has said it isn’t beholden to the RPI anymore, and is more inclined to study metrics, of the type compiled by Ken Pomeroy. His KenPom ranking has USC 67th.

The Trojans are 33rd in the RPI and, for what it’s worth, bracketologist Jerry Palm had USC as a No. 6 seed on Sunday morning.

But all of that is dust in the wind.

“The last play shouldn’t have mattered,” Enfield said. “We missed right-hand layups. We missed foul shots. I’ll take the blame for not having the right guys in there to hit the foul shots. We had a turnover in the half-court that didn’t have anything to do with their defense. If we make free throws, the game’s over. They also made a tough shot. Justice had to put extra arc on that shot from 24 feet. Give him credit for that.

“But our players looked pretty confident to me. We battled back twice in the second half. We played well enough to win.”

Boatwright talked of the Trojans “going back and getting our minds right.” Visits by Washington and Washington State, who were a combined 7-23 going into their game Sunday. The Pac-12 tournament is right behind that.

What we know is that USC will suffer abdominal tightness if it loses any more games to defeatist programs. Boatwright managed a weak smile as he thought of the expiring seconds.

“I’ll make the next one,” he said, on a day when promises were cheap.