SAN DIEGO – Tom Telesco started on the bottom floor before he knew it was an analogy.He came to the Carolina Panthers when they were an expansion skeleton. He was an intern, fresh off his receiving career at John Carroll University, unsure of anything... 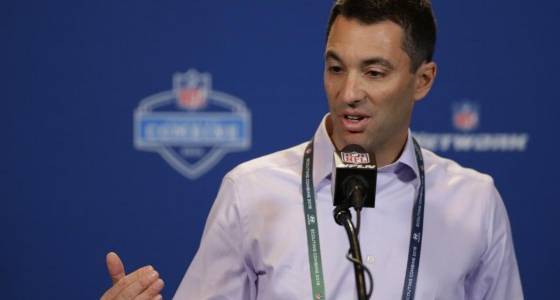 SAN DIEGO – Tom Telesco started on the bottom floor before he knew it was an analogy.

He came to the Carolina Panthers when they were an expansion skeleton. He was an intern, fresh off his receiving career at John Carroll University, unsure of anything except that he wanted to work in the field of pro football.

“I rolled the tarp off the field, I worked in the weight room,” Telesco said the other day. “Our offices were in the basement of the Winthrop University gym, in Rock Hill, S.C. I just went down there for training camp. Things would come up and they’d have me do them. When camp broke, there were still things to do.”

Telesco is 44, though he looks 34, and has spent his youth and much of his incipient middle age consuming pro football from the roots.

Telesco isn’t speculating. He is refreshingly devoid of theory, having spent his life learning to love an unlovable game, and thus discerning the pigskin from the hogwash.

“It’s tough to know where we are,” he said of the Chargers. “I don’t know. We have a good core. But we turned it over way too much. We did get more turnovers defensively, but we have to rush the passer better. Go through all the tough losses. There’s a different reason for each one.”

The Chargers got wiped out by injuries, dealt with a holdout from eventual Defensive Rookie of the Year Joey Bosa, and kept playing 55 minutes when 60 were required. They were minus-7 in turnovers, with 14 lost fumbles and 21 interceptions.

Telesco has largely drafted by the book. He traded up to get runner Melvin Gordon, and took Bosa with pick No. 3 when many studio experts thought he shouldn’t.

But he also took receiver Keenan Allen in the third round and 5-foot-9 cornerback Jason Verrett late in the first, and was rewarded for his unorthodoxy.

“You’ll never get perfect players,” Telesco said. “Bill Polian says you can take exceptions to the parameters you set up at each position. But those exceptions have to be exceptional. Five scouts can look at a player and have five opinions. It’s what I love about scouting. There’s a different story for every player.

“I love to get into meetings with them, get to know them. Does the guy love football? Does he have football intelligence and work ethic, and will he prepare? Because everybody in this league is good. Guys with great talent who don’t prepare aren’t around very long.”

Polian, the Hall of Famer who built the Bills, Panthers and Colts into Super Bowlers, has known Telesco longer than he even knows. Telesco remembers playing AAU basketball in Buffalo when Polian was refereeing.

At John Carroll, Telesco got to know Bill’s son Chris, and then became an intern at three Bills training camps. He learned the subtleties of the “dig” route by watching James Lofton.

In Charlotte he wound up at a desk next to Dom Anile, the scouting director. “I watched him take red pencils to scouting reports, saying, no, no, no,” Telesco said.

But Telesco also learned how to scout. When Anile tore his Achilles’ and couldn’t hit the road, Telesco took his place. Polian then took the Indianapolis job and brought Telesco. The intern became a protege.

So when Telesco came to San Diego, he didn’t find the Big Chair so intimidating.

“A lot of people come into this office,” he said. “Most of them have a issue. You have to remember you’re the leader and when you lose a game, you can’t have your head down all week. You also know that the gap isn’t that big between the winners and losers.”

“Bill Parcells always said that you are what your record is, and the Chargers were 5-11,” Polian said. “But I think they’re an exception. They have some really good players and they lost some tough games. The defense will be the key.”

The head-shakers in the league might point to the 30,000-seat stadium and L.A.’s pointed failure to hug the new team. None of that matters in the nuts-and-bolts bunker that Telesco calls home.

“If you love what you do, you can keep that perspective,” he said, looking at his old, empty practice field, dreaming of the next one. “I mean, it’s football.”