Last spring, Kyle Hendricks was one Chicago Cub who wasn’t receiving much attention.He was coming off a solid first full season in the majors, making 32 starts and posting a 3.95 ERA, and while he was slotted as the team’s fifth starter, that... 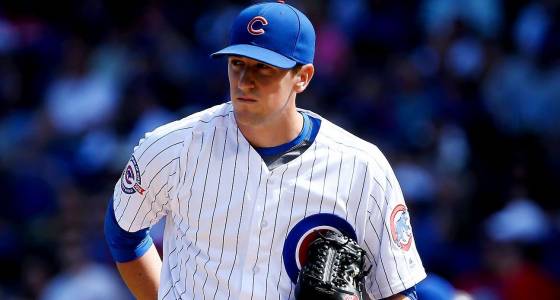 Last spring, Kyle Hendricks was one Chicago Cub who wasn’t receiving much attention.

He was coming off a solid first full season in the majors, making 32 starts and posting a 3.95 ERA, and while he was slotted as the team’s fifth starter, that position wasn’t guaranteed. The Cubs had acquired Adam Warren from the Yankees, and Trevor Cahill, Travis Wood and Clayton Richard were all getting looks as possible starters.

Hendricks talked about how he had spent the offseason and the first couple weeks of camp working on changing the angle and speed of his pitches while also focusing on pitch sequencing. Hendricks quietly pitched as well as anyone in the Cactus League, leading baseball with 30 strikeouts in 29 2/3 spring training innings while walking just four batters. He opened the season as the team’s fifth starter, but nobody expected what came next: a league-leading 2.13 ERA and third-place finish in the Cy Young voting.

Jean Segura wasn’t capturing any headlines last spring either. The Arizona Diamondbacks had acquired him from the Brewers, but the expectations were minimal even though he was still just 26 years old. Coming off consecutive bad seasons, he changed his stance in spring training, lowering his hands with the idea that he could get to the ball quicker. He hit .469 with three home runs in the spring and went on to lead the National League with 203 hits and batting .319.

At the same Salt River Fields complex that the Rockies share with the Diamondbacks, Trevor Story was turning heads. With face-of-the-franchise Troy Tulowitzki traded to the Blue Jays, the Rockies needed a shortstop, and Story capitalized on a chance to win the job despite a high strikeout rate in the minors that had led to him dropping off Top 100 prospect lists. Story hit .340 in the spring with six home runs and a .792 slugging percentage and then had that historic first week to start the regular season. He slammed 27 home runs in 97 games before going down with a thumb injury.

The official spring training slate will kick off Friday with five games -- four in Florida, one in Arizona -- after a few preliminary games between major league squads and college teams have been played. We’ll pay at least cursory attention because there will be, after all, box scores and highlights. And we have to see if Matt Kemp has really lost 30 pounds, if Matt Harvey is healthy and pumping his fastball and if Yoan Moncada is striking out too often.

The question lingers: Should we be paying attention, beyond the spectacle of exhibition baseball in great weather and $45 souvenir T-shirts?

After all, I could have just as easily pointed out that Maikel Franco led spring training last season with nine home runs, or that Michael Taylor hit .453 with five home runs, or that Pirates pitcher Juan Nicasio looked so impressive he was hailed as another successful Pirates reclamation project before the regular season had even started.

For much of baseball history, spring training did matter in a real way -- and it wasn't about just getting players in shape after an offseason of farming, peddling insurance, selling cars or just plain old drinking and eating. Players could actually win jobs with a hot spring.

However, that’s changed as front offices have learned not to overreact to what happens in a small sample size -- especially in Arizona, where the ball jumps out of those Cactus League parks, and players regularly post monster hitting stats over 50 at-bats or so. Teams usually enter spring with their Opening Day 25-man roster all but set. Of course, you can’t really come out and say that. You have to at least create the illusion that playing well matters; you don’t want players loafing through spring training thinking they have a job locked up. You have to tell the fans coming down from Buffalo Grove and paying $60 a pop to watch Jon Jay and seven minor leaguers that the games mean something.

In 2015, however, Dan Rosenheck, an editor at The Economist, presented a paper at the MIT Sloan Analytics Conference arguing that some spring training stats do matter -- at least a little bit. He wrote that despite the limited number of games and the uneven quality of opposition faced, “the claim that spring-training numbers are useless is wrong. Not a little bit wrong, not debatably wrong -- demonstrably and conclusively wrong. To be sure, the figures are noisy. But they still contain a signal.”

The key is knowing what stats to look at. Rosenheck’s study showed that peripheral stats like walk and strikeout rate stabilize much quicker in spring training than usual go-to stats like batting average or ERA (this is true in the regular season as well) -- and thus were more predictive of what does happen in the regular season. This was especially true for young players. Isolated power is another stat with some predictive value. Take Story, for example. At Double-A and Triple-A in 2015, he had a strikeout-to-walk ratio of 2.76. In spring training it was an improved 2.17, with power to go with it. That rate didn’t hold up in the majors (3.71), but it was perhaps a sign that he was improving his approach. Likewise, Hendricks’ strong spring peripherals were a positive sign heading into the regular season. Franco, meanwhile, had 12 strikeouts against just three walks -- the same overly aggressive approach that has held him back once the games started to count.

This isn’t to overstate the importance of spring training stats. For the most part, you don’t want to overreact to good or bad performances; the player’s prior history is still more important. Still, sometimes you never know. Back in 2010, when Jose Bautista had his breakout 54-homer season for the Blue Jays, he hit .439 and slugged .895 in the spring -- with just one strikeout in 57 at-bats. I’m also reminded of seeing Felix Hernandez start late last spring, when he was struggling to hit 90 on the radar gun. I was sitting next to one of the Mariners stats guys in the press box and asked him if he was concerned. He said no, that Hernandez doesn’t really air it out in spring training.

Well, guess what: He was never able to air it out in the regular season, either.

Bottom line: It’s still baseball, and that’s better than no baseball. It’s also still exhibition baseball. Check in on the guys coming to camp in the best shape of their lives; check in on the pitchers coming off injuries; enjoy seeing the kids coming up through the system. And if somebody hits .400 with a bunch of home runs -- maybe stick that in the back of your brain. Just in case.