When is the 2017 NASCAR Daytona 500? Time, TV channel, lineup, how to watch live stream online

NASCAR fans are getting set for one of the most anticipated racing events of the year with the 2017 Daytona 500 set for Sunday, February 26 at Daytona International Speedway in Florida. Below you'll find complete race and TV broadcast information,... 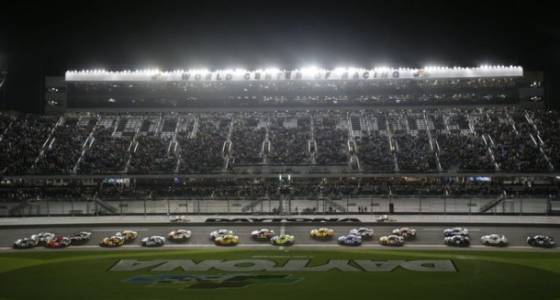 NASCAR fans are getting set for one of the most anticipated racing events of the year with the 2017 Daytona 500 set for Sunday, February 26 at Daytona International Speedway in Florida.

Below you'll find complete race and TV broadcast information, a schedule of events, lineup of participating drivers and more.

Last year, Denny Hamlin won the closest Daytona 500 ever, narrowly edging Martin Truex Jr. by one-hundredth of a second for the victory.

What will this year's race bring?

Chase Elliott has won the pole for the second year in a row, with the fastest one-lap qualifying time of 192.872 miles per hour.

Elliott, son of racing great Bill Elliott, will start in the front row of NASCAR's signature race, next to Hendrick Motor Sports teammate Dale Earnhardt Jr., whose best single-lap time of 192.864 mph, was just 0.002 seconds than Elliott's lap that won the pole.

In 2016, Elliott led for three laps but he crashed out early and finished 37th.

Hamlin led for 95 laps and had enough left at the end to eke out the dramatic win.

This is how it looked at the finish:

Qualifying coverage for the Daytona 500 can be seen on FS1 beginning Friday.

But Sunday is the big day in Daytona Beach, Fla., with the Daytona 500 main event taking place with TV coverage on Fox.

Coverage begins at 10 a.m. PT (1 p.m. ET) and the race is set to begin shortly after pregame festivities wrap up at 11 a.m. PT (2 p.m. ET). Jordin Sparks is set to sing the National Anthem before the race begins. Hollywood actor Owen Wilson will tell drivers to "start their engines," and former NFL star running back LaDainian Tomlinson will wave the green flag to kick things off.

Watch online: Live streaming is available on Fox Sports Go, or by using the Fox Sports App provided on your Apple TV, Roku or other streaming device.

Here is the complete lineup of drivers for the 2017 Daytona 500 (car number in parentheses):

In case you want to watch some of the early buildup to the race, here's the the qualifying and race schedule for Friday and Saturday: