What to know about new Alabama offensive coordinator Brian Daboll 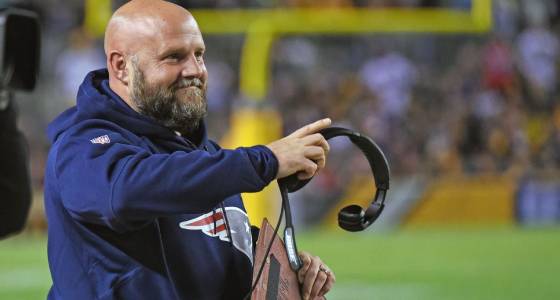 Brian Daboll will be Saban's third coordinator in three months.

On Monday -- nearly two weeks after Steve Sarkisian surprised everyone by becoming the offensive coordinator of the Atlanta Falcons -- Saban announced that Daboll, the former New England Patriots assistant, will be Bama's OC.

To get you better acquainted with the Canadian-born former defensive back, here are four factors to consider:

1. He’s a graduate of the Saban-Belichick coaching tree

Of the many interesting things Lane Kiffin said on his way out the door as Alabama’s OC, his comments about how he might not have been the best fit personality-wise with Saban were interesting. It was an admission that, yes, Kiffin and Saban butted heads from time to time. And watching them from afar, it was easy to see that in their three years together, they never quite figured out how to deal with one another.

But that learning curve shouldn’t be such an issue with Daboll. The fact is that he and Saban are cut from the same cloth.

Daboll got his start in coaching as a graduate assistant in 1998 at Michigan State, where Saban was the head coach, and credits him as an important career influence. Daboll spent the 1998 and 1999 seasons in East Lansing before Saban left to become the head coach at LSU. But in the process of moving on, Saban helped get Daboll a job with Patriots coach Bill Belichick, one of Saban's closest friends in coaching.

Belichick and Saban had worked together with the Cleveland Browns, and Belichick hired Daboll as a defensive assistant coach in 2000 and later promoted him to wide receivers coach in 2002. He spent a total of 11 seasons in two stints in New England before accepting the job at Alabama.

When Sarkisian left Alabama, one of the primary questions about what to do with the vacant OC position was whether to target a candidate who had a wealth of quarterback experience. Jalen Hurts played remarkably well as a true freshman last season, but he struggled throwing the ball down the stretch and could have benefited from a coach with a strong history of developing quarterbacks.

Daboll, for better or worse, is not necessarily that guy. He isn't a former QB, which Sarkisian and Kiffin are. Instead, he was a safety at the University of Rochester and coached the defensive side of the ball until Belichick moved him to receivers coach in 2002.

But it’s important to note why he left New England after the 2006 season. It wasn’t just to follow fellow Patriots assistant Eric Mangini to the Jets. Daboll wanted to build his resume working with quarterbacks as well.

During his first season with the Jets, he had to navigate starting two quarterbacks when Chad Pennington and Kellen Clemens combined to throw for 15 touchdowns and 19 interceptions. The next year, however, Daboll was able to work with future Hall of Famer Brett Favre.

Although Daboll didn't work hands-on with Tom Brady during his time in New England, having that level of proximity to a quarterback many already consider the best of all time can't hurt in his new role as coordinator and QB coach of the Crimson Tide.

3. He was an offensive coordinator three times

Judging harshly, you could say that Daboll has been a failure as a coordinator in the NFL. In his four seasons as offensive coordinator with the Browns, Dolphins and Chiefs, his teams ranked 29th, 31st, 20th and 32nd in scoring.

But that’s not the entire picture, of course.

The NFL is a quarterback-driven league, and you have to look at who he had to work with at the position. In Cleveland, it was Brady Quinn and Derek Anderson one year, and Colt McCoy and Jake Delhomme the next. Daboll had Matt Moore and Chad Henne in Miami, and Matt Cassel and Quinn in Kansas City.

4. He knows about running the football

If you’re one of the many disgruntled Alabama fans starving for a return to a more consistent running game, we’ve saved the best for last. If there’s one takeaway from Daboll’s time in the NFL, it’s his willingness to rush the football.

Most recently with the Patriots, in addition to coaching tight ends, he and offensive line coach Dante Scarnecchia helped coordinate a running game that relied on a number of backs through the years, including LeGarrette Blount, Jonas Gray and Dion Lewis.

But even before that, as an offensive coordinator, Daboll liked to feature running backs. With the Browns, Jerome Harrison and Peyton Hillis had productive years. And with the Dolphins and Chiefs, Reggie Bush and Jamaal Charles each rushed for more than 1,000 yards.

At Alabama, it will be interesting to see how Daboll manages the running game. For one, he hass never worked with a running quarterback such as Hurts. But more than that, he’ll have to distribute carries to a backfield that includes productive players in Damien Harris, Bo Scarbrough, Joshua Jacobs and B.J. Emmons, not to mention early enrollee and former five-star back Najee Harris.