What the franchise tag means for the Giants, JPP and the salary cap

The New York Giants had a tool at their disposal to greatly increase their chances of keeping defensive end Jason Pierre-Paul for at least another season. They didn’t hesitate to utilize it Monday when they once again used the franchise tag on their... 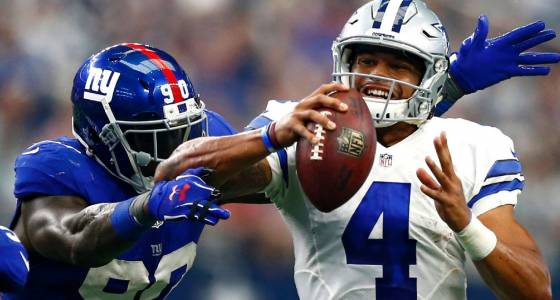 The New York Giants had a tool at their disposal to greatly increase their chances of keeping defensive end Jason Pierre-Paul for at least another season. They didn’t hesitate to utilize it Monday when they once again used the franchise tag on their 2010 first-round pick.

It was the second time in three years the Giants used that tag on Pierre-Paul. Both sides hope this time it works out better.

The franchise tag for a defensive end this year is worth 10.14 percent of the salary cap, according to a source. That comes out to a touch over $17 million, using an estimate of $168 million for the cap. With the Giants set to have just about $30 million under the salary cap entering the start of free agency next week, that’s 57 percent of their available funds this offseason now devoted toward Pierre-Paul, if he plays under the one-year contract available to a player with the franchise tag. Another 10 percent or so has to be allotted for draft picks.

This financial situation isn't desirable for Pierre-Paul or the Giants. It’s not likely to ultimately play out this way, either. Both sides want to agree to terms on a long-term deal.

In fact, Pierre-Paul craves that long-term deal. He made it clear earlier this year he didn’t want to play on a third consecutive one-year contract. He has waited long enough for the long-term security that a player with his resume usually attains earlier in his career.

So far it hasn’t happen for Pierre-Paul for a variety of reasons, several of those self-inflicted. (See: July 4, 2015, fireworks accident.) But he returned and played this season at a level that would make him extremely marketable -- and rich -- if he made it anywhere near the free-agent market. The Giants are aware, and that is why they didn't let it happen.

Pierre-Paul and his team know as well. "I'm not playing on no one-year deal," Pierre-Paul said after he missed the Giants' season-ending loss to the Green Bay Packers in the playoffs following sports hernia surgery. "I've proved it. I've showed it. There is not really another guy like me out here doing it with 7½ fingers still."

The Giants don’t want Pierre-Paul to count so much ($17 million) against this year’s salary cap. It could prevent them from making other moves, such as bringing back defensive tackle Johnathan Hankins or adding a veteran offensive lineman or playmaker.

The Giants have been intent on trying to keep their defense intact after seemingly building something special as this past season progressed. They allowed the second-fewest points in the NFL after rebuilding the defense last offseason through free agency. Pierre-Paul (7.0 sacks and eight batted passes in 12 games) was a significant part of that. So were Hankins and linebacker Keenan Robinson, both free agents.

The hope this offseason was to fix the fledgling offense. The Giants desperately struggled to score points this past season and need reinforcements for the offensive line and another playmaker.

That doesn’t come cheap in free agency. They know it. So do Pierre-Paul’s representatives, which puts them in an advantageous position. They have a valuable commodity that the Giants want to sign long term, and perhaps need to sign long term sooner rather than later. Free agency begins March 9, and the Giants would prefer to have all of their financials in order prior to the start of the frenzy.

That puts pressure on the team to get something done quickly. For Pierre-Paul, it doesn’t matter if he gets his deal now or sometime this summer, before the July 15 deadline to sign franchised players to long-term deals. All that matters to him is that he gets the long-term deal he feels he has earned.

Pierre-Paul, 28, watched last offseason as the Giants signed defensive end Olivier Vernon to a five-year, $85 million deal with $52.5 million guaranteed. Now it’s his turn, and the Giants and Pierre-Paul are in position where it’s advantageous for both sides to get a deal done.

So it will happen. The only question now seems to be who will break and when.