What should Chargers do with the No. 7 overall pick in the NFL draft?

INDIANAPOLIS – The Chargers hold the seventh overall pick in the 2017 NFL draft, and with it, a chance to step toward winning football.About time. This is a team that has won just nine games the past two seasons, one that has not made consecutive playoff... 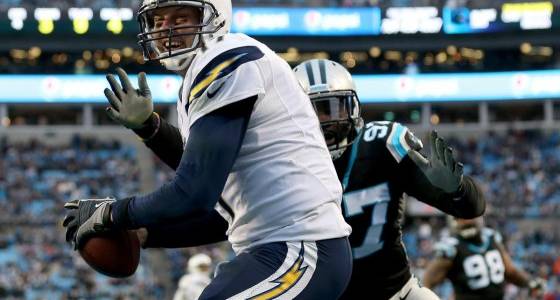 INDIANAPOLIS – The Chargers hold the seventh overall pick in the 2017 NFL draft, and with it, a chance to step toward winning football.

About time. This is a team that has won just nine games the past two seasons, one that has not made consecutive playoff trips in seven years, and one that needs to nurture a nascent Los Angeles fan base. So, come April, how should the Chargers try to improve their roster?

“If you’re in the top 10,” NFL Network analyst Mike Mayock said, “you’ve got to come out with a Pro Bowl player.”

In other words, grab the best guy available.

That’s a message General Manager Tom Telesco echoed recently, arguing that their roster is balanced enough for the Chargers to prioritize talent over positional. Offseason optimism is common for struggling NFL teams, months removed from the end of a disappointing season and months away from the realities of the new one.

But the Bolts have reasons for hope as they head into this week’s NFL scouting combine, not least of which is the presence of Philip Rivers. In a quarterback-driven league, having a six-time Pro Bowler under center is a luxury not many teams have – even if that quarterback is 35 years old. The problem is an offensive line that has allowed him to be sacked 76 times in the last two years.

It’s a unit that could look dramatically different by the time the Chargers step into StubHub Center. Left tackle King Dunlap, a 31-year-old who has lost 13 games to injury since 2015, could be a salary cap casualty – particularly after his February arrest for violating a protective order.

“We have to play better as a unit up front,” offensive coordinator Ken Whisenhunt said. “There were just too many times where we had missed opportunities because we didn’t do a good enough job, whether it was protection or run-blocking. ... We’ve got to protect Philip better than we did.”

The 2016 draft class was a boon for NFL offensive lines, with four tackles coming off the board in the top half of the first round. That included right tackle Jack Conklin, who went eighth overall to Tennessee. The Titans’ sacks allowed fell from 54 to 28, and the former Michigan State standout became one of three rookies named to the All-Pro first team.

But a quick-fix prospect such as Conklin might not be available this spring. Alabama’s Cam Robinson is a candidate, but some analysts see him more as a guard. Mayock thinks this year’s best offensive tackle is Ryan Ramczyk, but added that the Wisconsin product would’ve been the fourth- or fifth-best prospect at his position last year. Utah’s Garett Bolles, another one-year college starter, is next. Both could be gone by No. 20, Mayock said, but neither one is worth taking seventh overall.

But while the pool for offensive tackles may be shallow, Mayock called this “one of the best defensive drafts I’ve seen” – particularly for edge rushers, cornerbacks and safeties. Mid-round value exists for all three positions.

For the Chargers, though, need and talent could coincide. The team has a capable pass-rushing duo in Joey Bosa, last year’s third overall pick, and Melvin Ingram, who was franchise-tagged Monday. It also has Pro Bowl cornerbacks in Casey Hayward and Jason Verrett.

The safety position is a bigger question. An ugly breakup with longtime starter Eric Weddle left the Chargers with Jahleel Addae and Dwight Lowery in their 2016 lineup; the former is an unrestricted free agent, and the latter just turned 31. Enter Ohio State’s Malik Hooker, whom Mayock praised for his range, ball skills and instincts.

“I think Malik Hooker fits them like a glove,” he said.