What are the top storylines heading into the Charlotte 49ers’ spring football game? 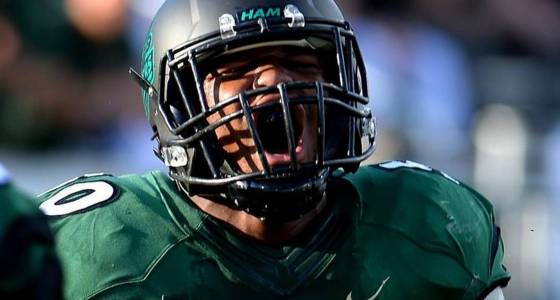 Almost four months stand between the start of the 2017 season and King potentially surpassing his former teammate. Yet, with Charlotte holding its spring game at 6 p.m. Saturday at Richardson Stadium, King will be anxiously awaiting a different tackle.

“First big hit. I can’t wait to see it. I love it,” said King, when asked about what he’s looking forward to the most at the spring game.

As King, a former standout at Charlotte Catholic looks forward to that, here are five things for fans to watch Saturday:

After the 49ers lost 27 seniors from last season’s squad, one of their most notable holes comes in the backfield, where they’ll look to replace all-time leading rusher Kalif Phillips.

“(Washington) and Benny LeMay are locked in a pretty good battle,” Lambert said. “I like where both of those guys are. Both of them are going to have to run (Saturday).”

The return of redshirt junior Hasaan Klugh, who led Charlotte to its first three Conference USA wins last season, gives Charlotte far more stability at quarterback than its had in past ones.

However, if Klugh missed time, Lambert said redshirt junior Brooks Barden, who’s coming off back surgery, has emerged as the next in line to step under center.

“Brooks is in a good spot …” Lambert said. “I would feel really comfortable if Brooks went in the game right now. I’ve really been pleased with the spring he’s had.”

Although all-time leading receiver Austin Duke has graduated, the 49ers have experience in the receiving corps, including starters Workpeh Kofa and T.L. Ford.

Senior Chris Montgomery is one of the primary candidates to fill Duke’s role in the slot, and Lambert said Montgomery has proven himself this spring.

Since the start of spring practices, Lambert has constantly emphasized how important it’s been to develop the defensive line following the departures of Brandon Banks and Ogunjobi.

Saturday will mark that group’s first real test, and Lambert has mentioned redshirt freshmen Austin Paraison and Johnny Ray as players who have impressed him.

Redshirt sophomore Tyriq Harris showed flashes of potention last season at outside linebacker and was named to the C-USA all-freshman team.

Harris will likely see a more significant role, both through his play and his leadership.

“When it comes to his rushing, I feel like he’s going to have a lot more sacks this year,” said King of Harris. “I can’t wait to see what he can do. And in the run, when we have our 4-3 defense and he's on the edge right there, I know I can trust him and expect him to do what he has to do.”