We had another great stretch last weekend.We hit all five picks.And if you’ve followed these predictions over the years, you know we’re probably due for another calamitous weekend.Last week: 5-0Overall: 36-23BYU at No. 1 Gonzaga, 10:15 p.m. ET... 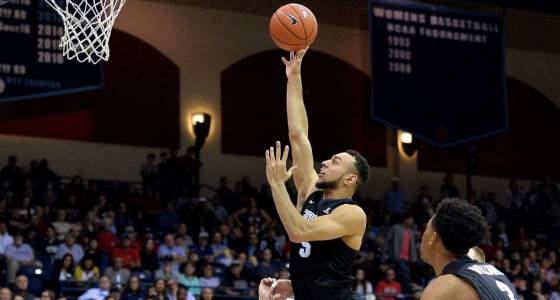 We had another great stretch last weekend.

We hit all five picks.

And if you’ve followed these predictions over the years, you know we’re probably due for another calamitous weekend.

BYU at No. 1 Gonzaga, 10:15 p.m. ET Saturday, ESPN2: A perfect regular season means something. No matter what happens in the postseason, Gonzaga will dance with the greats if it punctuates an unblemished campaign with a victory over BYU in Spokane, Washington, on Saturday night.

So much can go wrong each season. Injuries. Bad chemistry. Tough nights. Lights-out performances by the competition.

And yet Gonzaga (29-0) has positioned itself to win its first 30 games. The Bulldogs have defeated their opponents by an average of 24.9 points. They have wins over Florida, Arizona, Iowa State, Tennessee and Saint Mary’s (twice). The West Coast Conference offers few top-50 challenges, so Gonzaga created its own in-conference competition called “Can we win by 40 tonight?” as it mauled league foes.

The Zags have a pair of future pros (Zach Collins, Nigel Williams-Goss), a consistent big man (Przemek Karnowski) and veteran contributors in their nine-man rotation.

This BYU squad plays as fast as a Dave Rose squad often does (fourth in adjusted tempo, per KenPom.com), but the Cougars don’t shoot as well as past squads (33.9 percent from the 3-point line).

They’re not going to ruin history for Gonzaga.

No. 5 UCLA at No. 4 Arizona, 8:15 p.m. ET Saturday, ESPN: You know what’s wild? Steve Alford’s squad scored 85 points, registered 1.16 points per possession, committed just six turnovers, made 55 percent of its shots inside the arc, enjoyed a 24-point, 8-assist night from Lonzo Ball ... and still lost by 11 points in its first matchup against Arizona, at Pauley Pavilion.

The Wildcats were unstoppable that day. And now they’re in Tucson, where they’ve lost just one game since the start of the 2013-14 season.

No. 13 Florida at No. 11 Kentucky, 2 p.m. ET Saturday, CBS: Kentucky is an intriguing assembly with a troubling flaw: poor rim protection (UK’s opponents have made 61.6 percent of their shots at the rim, per hoop-math.com).

When Florida beat Kentucky by 22 points in Gainesville on Feb. 4, the Gators made 56 percent of their shots inside the arc and held Wildcats star Malik Monk to a 4-for-14 clip from the field.

Now they’ll meet again to break their first-place tie atop the SEC.

No. 23 Creighton at No. 2 Villanova, 3 p.m. ET Saturday, Fox: Give Butler credit. Earlier this week, the Bulldogs completed a sweep of Villanova.

But the Wildcats haven’t lost two in a row since the 2012-13 season. Bad news for Creighton. Plus, Villanova dominated Creighton in the first game -- when injured (now suspended) Bluejays point guard Maurice Watson was still healthy -- and now the Wildcats are set to host the rematch.

No need to subscribe to any pessimistic projections about Nova. Tough loss to a good Butler team earlier this week. Still a smart pick to win another national title.

No. 14 Purdue at Michigan, 4 p.m. ET Saturday, ESPN2: Matt Painter’s team is blessed with a national player of the year contender, Caleb Swanigan, and it also makes 41.3 percent of its 3-pointers (fourth in the country).

But Michigan could add a significant victory to its résumé by beating the Boilermakers. Doesn’t mean the Wolverines will.

No. 10 Duke at Miami, 4 p.m. ET Saturday, CBS: Syracuse ended Duke’s winning streak with a crazy buzzer-beater earlier this week. Not enough to trigger any “here we go again” comments about Duke.

The Blue Devils are still contenders for the ultimate crown, although their ACC title hopes took a major hit in the loss to the Orange.

But Miami gets Ja'Quan Newton (15.0 points per game) back from a three-game suspension for violating team rules. The Hurricanes beat Virginia on the road without him.