You know what the Internet is flooded with this time of year? Lots and lots of columns with people pontificating about which NFL prospects have a chance to improve their draft stock at the NFL Scouting Combine. So what's one more?Following up on writing... 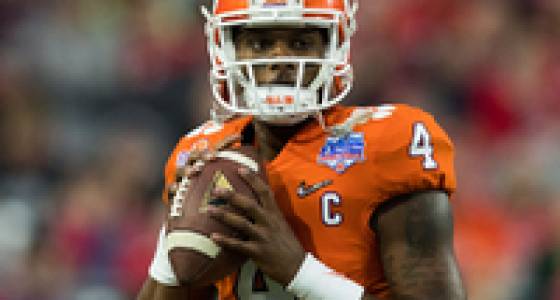 You know what the Internet is flooded with this time of year? Lots and lots of columns with people pontificating about which NFL prospects have a chance to improve their draft stock at the NFL Scouting Combine. So what's one more?

Following up on writing about players who helped themselves at the Senior Bowl, I've put together a list of several players I'd like to see do some standout things in Indianapolis.

Also a word of warning. You might not see a ton of the top prospects here. Guys like Mike Williams, Corey Davis and Leonard Fournette are fairly locked in and can really only help their draft stock by small degrees over the next week. Instead, here's a look at a handful of players who can truly put their names on the draft radar with a big few days at Lucas Oil Stadium.

Deshaun Watson, Clemson: Remember when I said I wasn't going to talk about a lot of top prospects? That might have been a little bit of alternative facts. The truth is there's a logjam atop the quarterback rankings as we reach the heart of draft season. So when one of the top prospects at the position says he's going to throw at the combine, it ups the ante for everyone else in the class. Teams will have plenty of questions about Watson's arm strength and accuracy as well as his ability to read defenses. Some strong interviews and good work throwing the football could vault him to the top of the class. At least temporarily.

Patrick Mahomes, Texas Tech: Mahomes has started earning more buzz as we head to the combine. Critics have pointed to obvious flaws with his footwork and mechanics. Supporters have pointed to the results. Seeing him throw at the combine could go provide a lot of ammunition for one side over the other. Sadly most of the primary quarterback prospects won't throw until their respective pro days, so we may have to wait a while to have those queries answered. Nonetheless, Mahomes could go a long way toward bolstering his dual-threat bona fides by showing his athleticism in Indy.

Mitch Trubisky, North Carolina: The Trubisky hype train didn't leave the station until late in the college season, but it picked up steam pretty quickly. It doesn't take a ton of film study to understand why so many scouts are high on Trubisky, but with a limited number of starts -- 13, all coming in 2016 -- there will be questions about how NFL-ready he is. He can answer a few of those with some solid interviews. After measuring a couple inches shorter than expected at the Senior Bowl, Trubisky could stand to show well in the drills to allay some of the scouts' fears.

Deshone Kizer, Notre Dame: Much like Trubisky, Kizer has a resume that's long on skill but short on experience. There are few, if any, questions about Kizer's arm strength. Most of the scouts' concerns center around the quarterback's decision making ability. Those issues won't be adddressed until teams have a chance to put him through some work with coaches on reading different schemes. Where Kizer can help himself this week will be with a chance to show his overall athleticism, which could prove big for a player earning comparisons to the late Steve McNair.

D'Onta Foreman, Texas: NFL Media's Lance Zierlein talked about Foreman at length on a recent episode of the NFL Fantasy LIVE podcast, noting that the big Texas back didn't exactly play up to his size. The combine won't offer any chances to prove that Foreman can be a bulldozer at the NFL level, but he can bolster the optimism surrounding his agility. It also wouldn't hurt to see him post a quality time in the 40 and help tamp down some of the worries about his overall play speed.

Alvin Kamara, Tennessee: Admittedly, I don't share the same level of excitement that many in Draft Twitter seem to have about Kamara. He spent the past season at Tennessee as part of a running back committee that was dominated by quarterback Joshua Dobbs. This will be a week where Kamara needs to showcase as many of his attributes as possible to prove that he can be more than a college passing-down back. After suffering both a torn meniscus and a sprained LCL to prematurely end his season in 2016, Kamara will also have his medical evaluations closely examined in Indianapolis.

Donnel Pumphrey, San Diego State: Pumphrey might own the NCAA record in career rushing yards, but scouts and coaches still see a player who measured 5-foot-9 and 169 pounds at the Senior Bowl. Since a major growth spurt between now and the end of the week seem highly unlikely, Pumphrey's work on the bench press could be critical at the combine. The current belief is that the slight San Diego State star lacks the physical strength to consistently be an impact runner in the NFL. Here's a chance for Pumphrey to push back.

Cooper Kupp, Eastern Washington: Kupp was one of the darlings of the Senior Bowl, earning high marks from nearly everyone in attendance. Yet the biggest question will be whether he has the speed to play as an outside pass-catcher or if he'll be a big slot receiver in the mold of Jordan Matthews. Certainly 40 times aren't everything and while Kupp doesn't need to be the fastest wideout on the board, he will at least need to prove to scouts that he isn't slow.

Juju Smith-Schuster, USC: Smith-Schuster is a player whose numbers as a sophomore earned him added attention as a junior. That added attention didn't always lead to positive evaluations. The Trojan standout was often quick to get off the line of scrimmage but lacked the type of speed that would prevent corners from recovering. In order to prove he won't be doomed to a life of making contested catches, Smith-Schuster needs to show well in the agility drills and could help himself with a decent 40 time.

Chad Hansen, Cal: Hansen had eye-popping numbers playing in Cal's Bear Raid offense with quarterback Davis Webb but much like with Smith-Schuster, much of that attention exposed flaws in his game. The most glaring might be his struggles at beating coverage on intermediate routes. Some of that could be masked by solid work in the 3-cone drill this week.

Zay Jones, East Carolina: Jones announced his presence with a couple of circus catches at the Senior Bowl, though watching his tape suggests that game was something of an anomaly. While Jones had video game numbers in college, much of his production came from short routes and wide receiver screens. That's generally because he wasn't exactly running away from defenders in his downfield routes. Jones will be yet another receiver whose NFL Draft future could be largely determined by his 40 time.

David Njoku, Miami: This year's tight end group is rife with talent and Njoku could find himself at the head of the class. His overall athleticism and ability as an offensive playmaker has won him comparisons to another tight end from "The U" in Greg Olsen. Showing that athleticism with good combine work could make him the first tight end off the board ahead of Alabama's O.J. Howard. Njoku could likely lock it up for good if he can perform well in the bench press, erasing some criticism of his play strength.

Adam Shaheen, Ashland: As we've gotten closer to the start of the combine, there's been more buzz about Shaheen. He's a physically imposing player (6-foot-6, 277 pounds) with the body of a blocking tight end and the skills of a move tight end. Because he played at a Division II school, he'll need to good combine measurables to back up the stats he posted against a lower level of competition. If he can make a name for himself in this crowded tight end class, he could have a relatively early impact in the NFL.

Marcas Grant is a fantasy editor for NFL.com. His snapchat (marcasg9) is a mixture of fantasy football and shenanigans. He's currently spending his offseason by nerding out at the library and playing "Missile Command" on his Atari 2600. That loud "WOOOO!" you heard last night was him breaking 10,000 points. If you read all of that, congrats. Follow him on Twitter too.