Melvin Gordon wants to get a running start. Anthony Lynn wants him to take a deep breath.The Chargers’ new head coach hopes to push his team into immediate and perennial contention, something the franchise hasn’t experienced in over seven years.... 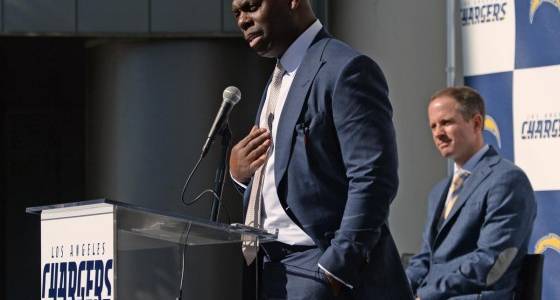 Melvin Gordon wants to get a running start. Anthony Lynn wants him to take a deep breath.

The Chargers’ new head coach hopes to push his team into immediate and perennial contention, something the franchise hasn’t experienced in over seven years. It’s a task that’ll be much easier if his promising young tailback stays healthy.

“He’s such a workhorse,” Lynn said of Gordon, who totaled 1,416 yards and 12 touchdowns from scrimmage last year. “He’s ready to do some stuff now. ‘What do you want me to do now?’ I want you to do nothing now. I want you to rest now.”

Some of this is enforced by NFL rules. Franchises with new coaches can’t start offseason programs until April 3. Before that, players can use team facilities, but can’t participate in club-supervised workouts and meetings, or study film and plays with coaches. That leaves the players in charge of their own training, and the staff focused on constructing the roster – particularly with the NFL scouting combine starting this week in Indianapolis.

But a conservative approach to the offseason can be beneficial for the current roster. The Chargers ended last season with a league-high 21 players on injured reserve. Few NFL teams navigate a full schedule unscathed, but this one lost eight games by seven or fewer points. Given the absences of players such as Keenan Allen (2,554 receiving yards through his first three seasons) and Jason Verrett (a Pro Bowl cornerback in 2015), it’s easy to wonder, ‘What if?’

The Chargers should be healthier this fall, if for no other reason than regression to the mean. That doesn’t mean they can’t take extra measures. Gordon, for example, sat out the Pro Bowl late last month – a precautionary move after missing three full games with hip and knee injuries.

And when Lynn arrived in San Diego, a trainer fed him an alarming statistic: Under new head coaches, NFL teams can see up to a 30 percent increase in injuries.

Regardless of accuracy, the number touched on something Lynn wanted to foster: continuity. The 48-year-old hired a new strength and conditioning coach in John Lott, but retained nine Chargers assistants, including offensive coordinator Ken Whisenhunt. Good coaches are good coaches, Lynn reasoned, even if he needed time to build personal relationships with them.

Keeping assistants, he said, also offers a secondary benefit: Preventing players – too eager to impress new faces – from overworking themselves in the summer. Lynn, who grew up working on a farm in a small north Texas town, isn’t one to shy away from an intense physical grind, but he’s also wary of making that the year-round norm.

“I’ve done that, where I want to outwork everybody,” said Lynn, who lasted six seasons as an NFL running back and won two Super Bowls with the Broncos. “I had that mentality. And then I realized, in the middle of the season, I’ve got no legs. You’ve got to be smart. You have to train, but train smart.”

“I do think there’s a period of time that players need to get completely away from football,” Lynn said. “The training regimen needs to be a little different. I don’t need you making hard cuts right now. That’s going to come in training camp. But a running back only has so many cuts in him. So I don’t want to waste them in the offseason.”