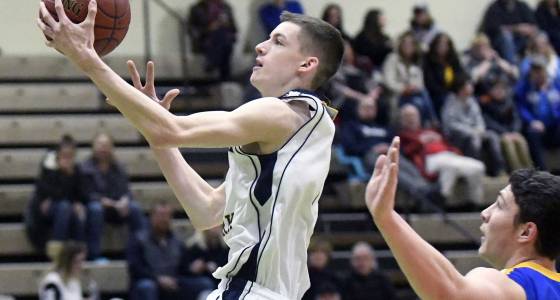 The cut under Anthony Germinerio's right eye continues to heal. The same can be said for the Averill Park boys' basketball team's won-loss record.

Battling against several elite Class AA squads as part of the Suburban Council, Averill Park suffered a 21-point loss against Colonie on Feb. 3 when the Garnet Raiders scored the game's first 33 points.

"Playing the AA teams makes us a lot better. It shows us we have to work hard every single game, no matter who we play," Germinerio said.

Sunday afternoon, the Warriors registered their sixth win in six games against Class A competition with a 54-42 victory over Queensbury in sectional quarterfinal play from Hudson Valley Community College.

The combination of Germinerio and senior point guard Noah Yearsley proved too potent for the Spartans to overcome. As a result, the third-seeded Warriors (11-10) have now won four straight games since the loss to Colonie and will next meet No. 2 seed Scotia (17-4) Wednesday night in the Class A semifinals at Glens Falls Civic Center. The Tartans locked up their berth with a 63-40 decision over seventh-seeded Hudson Falls.

"We have a tough road ahead of us. We know that," Germinerio said. "We're going hard in practice and our secondary guys are really helping out with that. They go very hard on defense, which makes us better on offense."

Averill Park finished with only four turnovers against Queensbury.

"There were points during the year when we took bad shots that were good for individuals. Today, I thought we shared the ball tremendously," Averill Park coach Dave Pugliese said. "I thought we took quality shots every trip, we used the shot clock when we needed to and we attacked when we needed to."

Germinerio showed off his versatility by scoring in the paint and also taking the ball up court in transition.

"I like bringing the ball up," Germinerio said. "Noah is a great point guard, but I have to bring it up once in a while to show off my ballhandling skills."

Queensbury trailed 32-28 with 4:20 remaining the third quarter, but Yearsley and Germinerio helped push the spread out to 45-33 with 4:21 left.

"It felt great to have a cushion," Germinerio said. "We battled today and played really, really hard," Pugliese said. "We preach, 'together, toughness and defense,' I thought we defended and shared the ball all day."