OAKLAND, CALIF.—Briante Weber finished up the Warriors’ Saturday night game against the Nets and was then informed of his release. The Warriors are going elsewhere with that 15th roster spot.That elsewhere is expected to be veteran guard Jose... 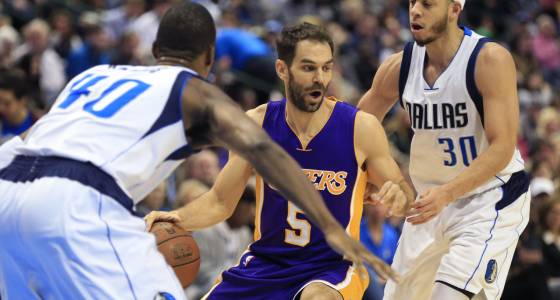 OAKLAND, CALIF.—Briante Weber finished up the Warriors’ Saturday night game against the Nets and was then informed of his release. The Warriors are going elsewhere with that 15th roster spot.

That elsewhere is expected to be veteran guard Jose Calderon, according to team sources. Calderon must first officially come to terms on a buyout and release from the Lakers, which is expected to happen in the coming days. But his partnership with the Golden State Warriors is already in motion.

Steve Kerr announced Weber’s release in his postgame press conference, saying he informed Weber moments earlier. Kerr confirmed that the team would soon sign a guard to fill his role, but wouldn’t get into specifics until it was fully completed.

“It’ll be a point guard,” Kerr said. “We think we have something in place, but it’s not finalized. Got to wait until it’s official.”

Calderon is a Spanish guard in his 12th NBA season. He has only appeared in 24 games this season, starting 11, averaging 3.3 points per game with the Lakers. Calderon has had some nice seasons — averaging double-digit points seven different years — but, at 35, is clearly on the downside of his career.

Calderon’s most useful skill is his three-point marksmanship. He is a career 41-per-cent shooter and shot better than 40 per cent as recently as last season. But he’s only shot 35 per cent with the Lakers this season, taking only 34 and making 12.

In Calderon, the Warriors opted for a win-now veteran option with that 15th roster spot instead of sticking with Weber, a younger, longer-term developmental piece that could potentially provide cheap labour into the future.

Weber showed off some intriguing quickness during his 22-day stint with the Warriors, flashing dogged defensive skills on the perimeter and a jolt of a first step on offence. But his shot isn’t there and he was buried in the rotation, allowing him very little court time to show the Warriors much.

But all is not lost for Weber. A few teams are already interested in his services, with Charlotte emerging as the likely landing spot, per a source.

“He’s going to be snapped up,” Kerr said. “I’m hopeful he can go somewhere where he can get more playing time than here. As I mentioned when we signed him, I liked the roster balance, I liked to be able to finish games with a more natural lineup out there. That’s what we are going to continue to do with the guy who is going to come in next.”