OAKLAND, Calif. — If Golden State has a flaw, let us know.Unless Draymond Green implodes and takes the Warriors with him, they looked worthy of all the adoration they get and then some. They lead the NBA in every meaningful offensive category. They defensively... 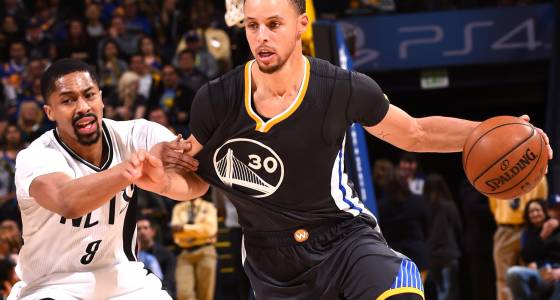 OAKLAND, Calif. — If Golden State has a flaw, let us know.

Unless Draymond Green implodes and takes the Warriors with him, they looked worthy of all the adoration they get and then some.
They lead the NBA in every meaningful offensive category. They defensively smothered the Nets, 112-95, despite Kevin Durant missing his first game since arriving this summer. And it was JaVale McGee — maligned by Shaquille O’Neal and embroiled in a nasty feud — that provided the grit and got the loudest cheers from the sellout crowd of 19,596 at Oracle Arena.

Steph Curry had a game-high 27 points and five assists, while Klay Thompson added 24 and four. In many ways, the Warriors are the anti-Nets. Even nowhere near their peak performance, they clinched a playoff spot and improved to a league-best 49-9, the inverse of Brooklyn’s cellar-dwelling 9-49.

“It wasn’t our greatest effort. … It wasn’t a great night, but it was a solid night, exactly what we needed to do,” Golden State coach Steve Kerr said.

“A win’s a win,” Thompson said.” You take any win you get in this league. Brooklyn plays incredibly hard, so you’ve got to respect them. … They muck the game up, made it really physical on us. But we pursued there at the end, that’s all you can ask,’’ said Thompson, who said Durant’s absence played a role. “We had to move the ball better because Kevin bails us out one-on-one a lot of times. When Kevin’s out, we have to do it more as a team. We can’t just throw it to him.”

But that’s how potent this Warriors team is. Sure, they lead the league in scoring, offensive rating, shooting and margin, but sans Durant on Saturday, they blocked 11 shots and held Brooklyn to just 40.4 percent shooting.

“I try to bring energy when I go out there,’’ said McGee, who had seven points, nine rebounds and a staggering six offensive boards. He even helped hold Brook Lopez to nine points on 3-of-13 shooting. “Defense is what we’re trying to do. Obviously we have four threats on offense; we’re not worried about offense. We’re trying to get better on defense and that’s been the emphasis.”

Leading 52-51 with two minutes left in the half, the Warriors closed on a 10-0 run to seize command. Up by seven, Andre Iguodala (nine assists) stole a Joe Harris pass with 6.5 seconds left to give them a final shot. Curry made it count when he drilled a wing 3-pointer and got fouled, completing a four-point play with 0.3 left.

The Warriors went into halftime up 62-51, and led by as much as 19. And even when the Nets cut it to 99-91 with five minutes left, Golden State forced seven straight misses in a game-sealing 11-0 run.

It’s hard to find fault with Golden State, hard to pick nits on an all-time offensive juggernaut. That O’Neal has managed to do just that shows just how hard Shaq trolls, sparking a feud with the affable McGee so intense that the Warriors called his employers Turner Sports while his teammates and coaches defended him.

“You know me, I’m Mr. Positive, smiling my way to the top,’’ said McGee. “I’m just a positive person and I just exude positivity. Everybody around me is happy when they’re around me. So I just love being me.”

About the only negatives are the McGee-O’Neal drama and the on-curt antics of Draymond Green, who had just five points in 22:56 and sat much of the fourth quarter, Kerr admitting, “It just wasn’t his night.”

The Warriors have few flaws, but that hasn’t stopped O’Neal from savaging McGee on “Shaqtin’ a Fool,” Inside the NBA’s blooper segment.

They’ve always trolled McGee, but on Thursday, they aired an entire “Doctor Strange” segment targeting just him. It prompted the affable McGee to get into a Twitter beef with O’Neal, who threatened to “smack the s–t out yo bum ass.”

But McGee has been anything but a bum, and Saturday he was a key part of a Warriors team that played half-speed and still rolled Brooklyn.