Warren Hills wrestling team won six of its eight NJSIAA Region 3 quarterfinals on Friday night at West Orange High School. But the Blue Streaks aren't celebrating yet. They know there's plenty of work to do, starting with the 9 a.m. Saturday semifinals.... 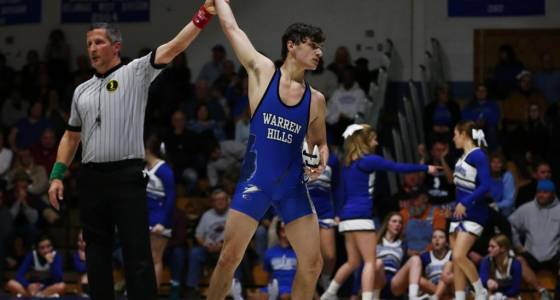 But the Blue Streaks aren't celebrating yet. They know there's plenty of work to do, starting with the 9 a.m. Saturday semifinals.

"We are (pleased), but we're still a long way off our goals. Nobody qualified for states yet. We don't have anybody in the next tournament yet. So tomorrow's another work day," Warren Hills wrestling coach Jarrett Hosbach said.

Valli won a 3-0 decision over Frank Gabriele of Verona at 132 pounds.

Nauta recorded a reversal with five seconds left in the 3rd period to beat Belvidere's Nick Cassidy 2-0 at 138 pounds.

Oberly earned a 6-4 decision over Saummy DeJesus Duran of Seacaucus at 220. In the last bout of the night, Zafis won a 2-1 decision in rideouts over John Murphy of Caldwell at 285.

Galka had an 8-7 decision over Lukasz Glazewski of Kearny at 182 and Ostir won a 7-6 decision over Kyle Schaffer of Caldwell at 170.

"I thought they all did a nice job in their own way," Hosbach said. "Everybody wrestled within themselves. They were able to advance. It wasn't the prettiest at times some of the bouts. But we were able to get the win and move onto the next round."

Nauta is looking for more success this year at regionals after being knocked out in the consolation semifinals last year.

Valli was pleased with his victory over a solid opponent like Gabriele.

"I knew the kid coming in was 30-1. He's a state qualifier from last year," Valli said. "He's a good opponent to wrestle. I just stuck to my offense, pretty much took control from that and just kept pushing him. Eventually I got one shot and I took him down from there and then I got out for one and rode him out."

All three Stateliners won by fall.

Melise pinned Queen of Peace's Keyon Means-Bowman in 1:40, Meyer earned a fall over Justin LeMay of West Morris in 3:07 and Day pinned Michael Rodriguez of Becton in 2:49.

"We let a couple slip away," Post said. "We just need to ourselves more opportunities. The good thing is you made it to the weekend so you can battle back through the backside. Hopefully get one of those top four spots and get down to Atlantic City. All six guys are still alive. Nobody's season's over tonight. Even if things didn't go your way in that round, you got to come back and get your mind set that you're going to battle back and take third or fourth to get to Atlantic City."

"He lost twice so he didn't win a match last year," Hackettstown coach Frank Rodgers said of Carida last year at states. "After that tournament last year, he got majored twice. He didn't take any time off. Went right to work. Started wrestling for this year. Wrestled all through the spring, all through the summer."