Since Dave Clawson became Wake Forest head coach, he has had a steady, reliable defense lead the way.So when he went looking for a new defensive coordinator to replace the departed Mike Elko, he wanted somebody who could step right in and provide the same... 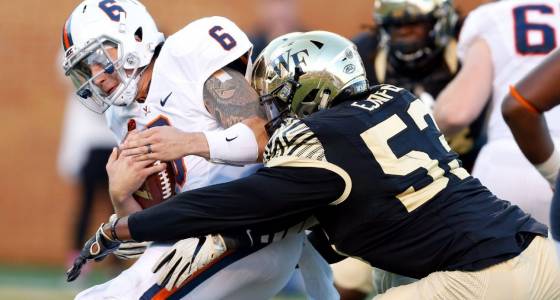 Since Dave Clawson became Wake Forest head coach, he has had a steady, reliable defense lead the way.

So when he went looking for a new defensive coordinator to replace the departed Mike Elko, he wanted somebody who could step right in and provide the same leadership. Former Minnesota coach Jerry Kill had the perfect guy in mind: his longtime assistant Jay Sawvel, who coordinated a Gophers defense that ranked in the top 25 this past season.

Kill vouched for Sawvel. Clawson made a few other calls and then reached out to Sawvel, who was let go at Minnesota with the entire staff under Tracy Claeys. Sawvel agreed to meet Clawson in Winston-Salem, North Carolina. The day he was offered the job was the first time they had ever met in person.

“I know coach Clawson did a lot of homework on me,” Sawvel said in a recent phone interview.

Sawvel knew about what Elko had done at Wake Forest, and the opportunity to coach in the ACC and move into the South intrigued him. Their styles are similar; that is one reason why he got Clawson’s attention. With spring practice set to open Tuesday, Sawvel will begin work on making improvements to what already is a solid foundation.

“The nice thing is the job they did, they established a culture defensively where the kids want to be good,” Sawvel said. “They want to be coached, and all that’s very important because that’s not always the case everywhere. Every situation presents its own challenges that way, and I would say the one I’m at now is the bigger challenge.

“You’re trying to build upon a solid, good situation. You’re not taking over the place that was terrible. So that’s the easy thing in coaching, you take over something -- well it can’t get worse. This is a completely different situation. They play good defense here, and now it’s a standard you’ve got to uphold. That’s a big challenge.”

Especially with a player like defensive end Duke Ejiofor returning to anchor what should be another top-notch defensive line. Ejiofor had 10.5 sacks a year ago and opted to return to school for his senior season, ranking as one of the best ends to come back to the ACC.

“I’ve always believed in matchups,” Sawvel said. “Get your best players the ball where they need to have the ball at the end of the game. With Duke Ejiofor, what does he do best and where can he be at his best? What positions does he need to be in to be able to play the way he needs to play. You try to do that with your best pieces and then you fit everything else around that.

“The experimentation that happens in the spring will be good in our situation because we’ve got to try to find out what we’re good at, what we’re not good at, and what we need to become as we go forward on everything.”

The offense should have a similar philosophy. Injured quarterback Kendall Hinton will be a full participant in spring practice, so expect another competition for the starting job with John Wolford. Nine starters return on offense, including every major contributor at quarterback, running back, receiver and tight end.

To continue on its upward trajectory, the offense must keep making strides to a point where it can match what the defense already has done. Because Sawvel has no plans to go in the other direction.