John Collins had 25 points and 11 rebounds to help Wake Forest rally from 14 down to upset No. 8 Louisville 88-81 on Wednesday night in Winston-Salem, N.C.Keyshawn Woods added 20 points for the Demon Deacons (17-12, 8-9 Atlantic Coast Conference), who came... 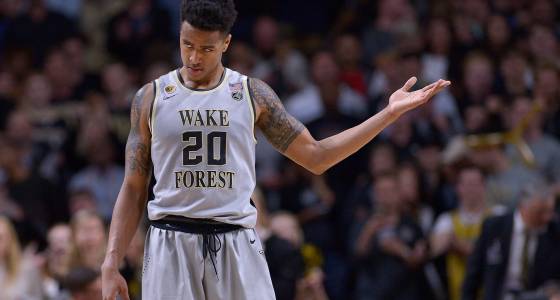 John Collins had 25 points and 11 rebounds to help Wake Forest rally from 14 down to upset No. 8 Louisville 88-81 on Wednesday night in Winston-Salem, N.C.

They got it, with Dinos Mitoglou and Mitchell Wilbekin hitting back-to-back huge 3-pointers in the final 3 minutes to turn a 75-72 lead into a nine-point margin.

Wake Forest is trying to reach the NCAA Tournament for the first time since 2010.

Deng Adel scored 22 points for the Cardinals (23-7, 11-6), who got off to a fast start but shot just 39 percent after halftime. They also struggled to slow the Demon Deacons once their offense got rolling, with Wake Forest shooting 46 percent and making 10 of 24 3-pointers.

This one ended with Wake Forest fans storming the court to celebrate.

Collins, a sophomore who has made himself a candidate for ACC player of the year, finished 7 of 12 from the field and 11 of 12 from the foul line to earn his 12th straight 20-point performance.

Wake Forest trailed 41-30 late in the first half but used a 20-4 run spanning halftime to take its first lead — and eventually pushed it to 11. Louisville got as close as three before Mitoglou and Wilbekin's huge 3s.

Florida swingman Canyon Barry got a glimpse of how close he is to being fully recovered from a sprained right ankle Wednesday night.

Barry blocked Dustin Thomas' shot near the basket with about 4 minutes to play. It was just his 10th of the season and first in nearly a month.

"First time I felt like jumping hasn't really hurt me," Barry said. "Starting to get my explosion back."

Just in time to help the Gators in the postseason.

Barry scored 14 points on Senior Night, his best game since injuring his ankle two weeks ago, and No. 12 Florida handled Arkansas 78-65 on Wednesday night in Gainesville, Fla.

Kasey Hill, KeVaughn Allen and Chris Chiozza added 12 points apiece for the Gators, who bounced back from their first loss in 10 games and clinched the No. 2 seed in the Southeastern Conference Tournament next week.

Florida (24-6, 14-3) controlled the game much of the night, building a double-digit lead early, extending it to as many as 16 in the first half and then holding on after the break.

Arkansas (22-8, 11-6) made it close midway through the second half, cutting the lead to 51-45 on Trey Thompson's straightaway jumper. But the Gators responded with clutch shot after clutch shot to make it a 14-point game again. Barry hit a driving layup out of a timeout, Devin Robinson followed with a 3-pointer from the wing and then Keith Stone completed a three-point play.

Stone finished with eight points, his best performance since mid-January. Florida had another comeback outing from Gorjok Gak, who missed the previous seven games because of a sprained foot. He had two points and two rebounds in 8 minutes.

But Barry was the story after scoring just 10 points in the last three games.

"He was much more athletic tonight than he was two weeks ago," coach Mike White said.

Ali Andrews had career highs with 24 points and six 3-pointers, leading three Illinois freshman who reached 20 points, and the No. 12-seeded Illini beat No. 13 seed Nebraska 79-70 on Wednesday in the Big Ten Tournament opener in Indianapolis.

Petra Holesinska added a career-tying 21 points and Brandi Beasley 20 for Illinois (9-21), who play No. 5 seed Purdue on Thursday.

Trailing by five, Illinois outscored Nebraska 23-9 in the fourth quarter, taking the lead for good on Andrews' final 3-pointer with 5½ minutes left.

Illinois snapped an 11-game losing streak, its previous win also coming against Nebraska on Jan. 15. The victory was the first for Illinois in the tournament since 2011.

Jessica Shepard had 16 points and 10 rebounds and Hannah Whitish 16 points for the Cornhuskers (7-22).

Illinois made 14 3-pointers and Nebraska 13 but the Illini were 17 of 22 from the free-throw line to 3 of 7 for the Cornhuskers. Nebraska also had 17 turnovers to Illinois' five.

Avyanna Young scored 20 points and No. 11 seed Wisconsin took advantage of a 13-point first half for Rutgers, beating the 14th-seeded Scarlet Knights 61-55 in the first round of the Big Ten Tournament on Wednesday in Indianapolis.

Marsha Howard added 12 points for the Badgers (9-12), who play No. 6 seed Michigan State on Thursday.

Rutgers made only 3 of 28 shots in the first half, missing all eight of its 3-point tries, in falling behind 27-13.

Wisconsin took its largest lead of 21 points in the third quarter and was up 12 when the period ended.

Parker scored 10 straight points for Rutgers in a run that got the Knights within six with 35 seconds remaining but no closer.