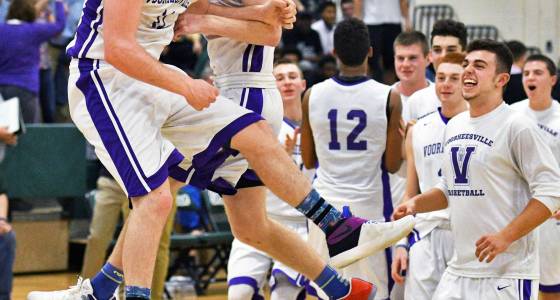 On the gridiron, Ryan Daly commanded the huddle as the starting senior quarterback for the Voorheesville football team. Friday night, Daly heeded the commands from boys' basketball coach David Burch with one second left in overtime.

Daly, who tied the game with 11 seconds left in overtime by draining a 15-foot jumper, had just missed the first of two foul shots with one second remaining.

"I basically said to him, 'You made the most important shot of the game on the shot to tie it.' I then said, 'I don't care if you make it or not. It would be great if you did,' " Burch said. "He needed a little break to calm his nerves."

Daly proceeded to drain his second attempt and Broadalbin-Perth's long inbounds pass failed to connect as Voorheesville secured a 55-54 victory over the Patriots in a Section II Class B quarterfinal contest at Shenendehowa.

Daly, who finished with 12 points, made the second of two attempts twice in overtime. Clearly, his second conversion was the most meaningful of his varsity basketball career.

"I had missed a key free throw earlier in overtime. Basically, I knew I had to do it for my team," Daly said. "I had them in mind. I tried to lock in, shut out all the noise in there and focused."

The Blackbirds' gritty triumph earned them a semifinal appearance Monday at Glens Falls Civic Center vs. No. 2 seed Mekeel Christian Academy. The undefeated Lions, led by the exploits from Deonte Holder and Carter Stewart, roared past Catskill 79-40 in the second semifinal at Shenendehowa.

Following Daly's jumper that tied the game, Broadalbin-Perth senior point guard Preston Taylor (20 points) missed on a drive. A scramble between Daly and Broadalbin-Perth freshman Dante Calderone for the rebound resulted in a foul called on Calderone. Broadlabin-Perth coach Tucker Gifford and his players vehemently disagreed with the call.

"All I will say to that is I really wish we could have let the players decide the game at the end," Gifford said. "I think (the officials) did that at the end of regulation when they ripped Joey's (Ladipo) arm off, and I am fine with (a no-call)."

Taylor provided the Patriots (14-8) a 53-49 edge when he drained a pair of jumpers to open overtime.

But the Patriots severely hindered their chances in regulation by making just four of 15 foul shots.

"We had opportunities all game long. I thought we never put them away," Gifford said. "We had so many opportunities from the line, with missed jumpers that we usually drop to bobbling the ball. The opportunities and the chances were there to finish."

P.J. Parker paced the Blackbirds (17-4) with 21 points and 11 rebounds. Voorheesville made just three of 15 attempts from 3-point range and struggled to penetrate the Patriots' 3-2 zone — committing 11 turnovers in the first half and 17 overall.

"As a team, shots are not always going to fall. You have to stick together," Daly said. "We gutted out another one like we always do."

Mekeel Christian Academy (21-0) dispensed with any drama and breezed into the semifinals.

Holder, who entered the game needing six points to reach 1,000, finished with a game-high 27 points (eight 3-pointers) to go along with six assists. Stewart contributed 24 points, 13 rebounds and six assists.

The Lions also excelled on defense as Jordan Jackson helped limit Catskill's leading scorer, guard Justice Brantley, to a season-low two points on 1-for-17 shooting. The Cats overall made only 19 of 59 shots.