DUNEDIN, FLA .—There are plenty of certainties, barring the unforeseen, about the Blue Jays’ opening day roster: Troy Tulowitzki will be at shortstop, Russell Martin will be behind the plate and Kevin Pillar will be in centre field.But it doesn’t... 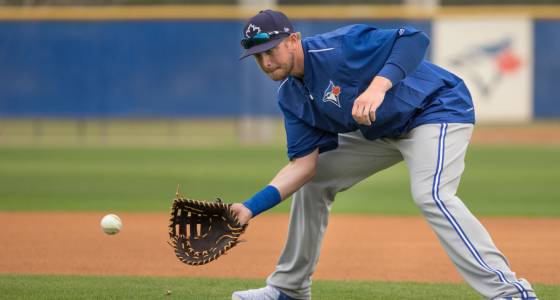 DUNEDIN, FLA .—There are plenty of certainties, barring the unforeseen, about the Blue Jays’ opening day roster: Troy Tulowitzki will be at shortstop, Russell Martin will be behind the plate and Kevin Pillar will be in centre field.

But it doesn’t mean manager John Gibbons’ work is done when it comes to ironing out his roster. Even with a primarily veteran-laden team, there are still decisions to be made. A primer on some of the key ones:

The switch-hitting Justin Smoak appears to be the favourite to take most of the at-bats that belonged to Edwin Encarnacion a year ago. But Smoak hit just .217 last year with 14 homers in 299 at-bats, and there are plenty of candidates for playing time at first.

Kendrys Morales, a key free-agent acquistion who has been primarily a DH in recent years, is an option, as is the versatile Steve Pearce, another free-agent signing. Pearce had surgery last September to clean up his right elbow, and might need to open the season at a position that won’t put too much stress on his arm.

There’s also 21-year-old Rowdy Tellez, a highly-touted prospect with raw power (23 homers at Double-A New Hampshire last season) who some believe will see the major leagues sooner rather than later.

Both Gibbons and Pearce have said that their goal is for the Florida native to be ready for the outfield by April 3, and he could see the bulk of playing time if healthy. But there are plenty lining up for the opportunity in left.

Melvin Upton offers speed (300 career steals) and experience (12 seasons) but has been inconsistent at the plate. The former second-overall pick in 2002 hit just .196 in 57 games with the Jays last season.

Ezequiel Carrera played in a career-high 110 games last season but, while he had a handful of key hits, the 29-year-old profiles best as a fourth outfielder.

Mississauga’s Dalton Pompey, who appeared to have been rushed to the majors in 2014 and handed a starting job prematurely in 2015, needs to regain some prospect status. He hit .270 with 18 steals at Triple-A Buffalo last season and is still just 24 years old.

The Jays replaced Brett Cecil, who signed with St. Louis, with 33-year-old lefty J.P. Howell, who had a 1.43 ERA with the Dodgers two years ago.

That signing pushes Aaron Loup down the depth chart. Loup’s ERA (5.02 last season) and WHIP (1.326) have been on the rise the last couple of years. He could be pushed by the likes of Matt Dermody and Chad Girodo, who combined to appear in 19 games with the Jays, and former Astros prospect Brett Oberholtzer, a 27-year-old now with his fourth organization in two years. Oberholtzer will make his first start for Toronto on Sunday against the New York Yankees.

Veteran Jarrod Saltalamacchia seems like as obvious a choice as backup as Martin is as the starter. Saltalamacchia was a regular starter as recently as 2014, and showed last year he still has some pop in his bat, with 12 homers in 246 at-bats.

Still, Juan Graterol, a 28-year-old career minor leaguer, hit .300 in the thin air of Triple-A Salt Lake City last year, and the Jays have a couple of interesting prospects in former first-rounders Reese McGuire (2013) and Max Pentecost (2014), the latter of whom has hit .308 in his first two seasons in the minors.