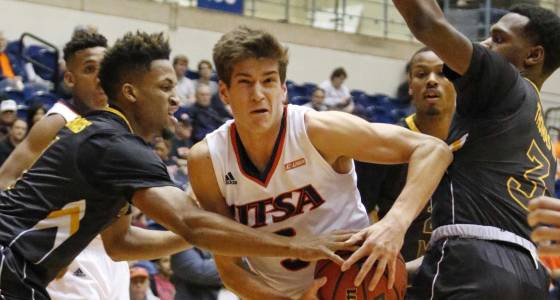 Series - Tied 3-3, including UTSA’s 68-63 triumph in San Antonio on Jan. 12. Jeff Beverly went for 29 points and 10 rebounds to lead UTSA and Gerdarius Troutman scored 16 for FAU in 16 minutes off the bench.

UTSA factoids - Coach Steve Henson’s team is coming off its second road victory of the season, a 69-67 triumph at FIU Thursday night that snapped a three-game losing streak and a five-game road losing streak … The Roadrunners shot 50 percent from the field against FIU, their second best shooting of the season behind only a 55 percent effort in a victory over Division II Southeastern Oklahoma State on Dec. 10 … Including Thursday’s victory, the Roadrunners have shot at least 45 percent from the field only five times this season … UTSA has struggled recently from the foul line, shooting 63.3 percent in their last five games … The Roadrunners committed nine turnovers against FIU, marking their sixth time this season with less than double figures. UTSA is 4-2 in those games … O’Brien hit the game-winning 3-pointer against FIU, finishing off a 17-point effort. In his last six games, O’Brien has scored in double figures five times and is averaging 13.2 ppg, 6.3 rpg and 51.9 FG% and 47.2% of his 3-pointers … Backup G George Willborn III is averaging 8.3 ppg in his last four games … UTSA was outrebounded by five and notched a season-low 26 rebounds at FIU on Thursday … It was the 10th time the Roadrunners have been outrebounded this season and the first time they have won when outrebounded after losing the previous nine games.

FAU factoids - The Owls dropped a 60-55 loss to UTEP Thursday night, shooting 43.6 percent from the field and allowing the Miners to shoot 48.9 percent from the field. Adonis Filer came off the bench to lead them with 15 points in 25 minutes ... It was FAU's third consecutive home loss and fifth loss in their last six home games ... After a three-game winning streak with road triumphs at FIU, Charlotte and Old Domion, the Owls have dropped four of their last five ... Their most notable victory came on Dec.6 with a 79-77 overtime win at Ohio State ... FAU coach Michael Curry spent 11 seasons in the NBA from 1993-2005 and later coached the Detroit Pistons in the 2008-09 season ... FAU has won only 26 games in the two-plus seasons that Curry has directed them and has never won more than 10 games in any season under him ... The Owls playing roster features several notable transfers, including C Ronald Delph (Auburn), Filer (Clemson) and Frank Booker (Oklahoma) ... FAU ranks 47th nationally in fewest turnovers per game (11.6) and 82nd in fewest fouls (492), but 286th in 3-point percentage (32.6%), 288th in rebounding margin (minus 2.9) and 317th in free throw attempts (475).

UTSA coach Steve Henson on the challenge of beating FAU after winning at FIU Thursday night: “They are another very good team. They are athletic and tough and they are playing pretty good basketball right now. We’ll have to be even better on Saturday.”

UTSA C Lucas O’Brien on what he remembers about beating FAU in San Antonio last month: “They are great team. They can knock down shots and have a great big man, so we’ve got our work cut out for us for sure.”