USC's plan to get into the NCAA tournament includes one must: no bad losses

During the course of a college basketball season, there are losses that can haunt a coach’s dreams, particularly if that coach’s team is not yet firmly in the NCAA tournament.Typically, there’s a hiccup during the nonconference season, or an uninspired... 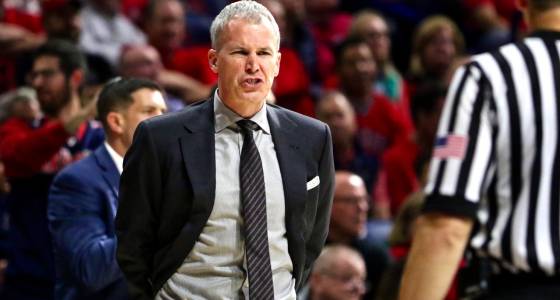 During the course of a college basketball season, there are losses that can haunt a coach’s dreams, particularly if that coach’s team is not yet firmly in the NCAA tournament.

Typically, there’s a hiccup during the nonconference season, or an uninspired conference game on the road — bad losses to inferior opponents.

If USC Coach Andy Enfield was searching for the Trojans’ worst loss — or even one against a team not likely to make the tournament — he would not have to look far down the standings. On Jan. 12, USC lost to Utah, on the road, where Utah has won all but three games this season.

Besides Utah, every other loss came to a team projected to make the tournament.

"Sometimes you win a little ugly,” Enfield said. “But the goal is to win games. We've done that this year."

USC’s players pointed out that there have been games when they were less than focused. The end of the nonconference season included uninspired wins against more forgiving opponents, such as Cornell and Troy. A sloppy game at home against California cost the Trojans a victory.

But the Trojans mostly shrugged at their consistency.

"If you don't want to compete and play your hardest, then basketball maybe isn't for you,” guard De’Anthony Melton said after USC completed an off-day practice on Friday.

USC’s recent skid against the Nos. 4, 5 and 6 teams in the country likely eliminated a chance for a high seed in the NCAA tournament.

“Seeding isn't really — it's a priority, but it's not really the top, top priority,” forward Chimezie Metu said. "We're just trying to get in at this point.”

For that to happen, USC (21-7, 8-7 in the Pac-12) just needs to do what it has done all season: avoid any bad losses. USC’s final three games, starting with a game Sunday against Arizona State (13-16, 6-10), are all against teams ranked outside the Ratings Percentage Index top 100.

"We've got to win the rest of these three games because any of the losses would probably be considered a bad loss at this point," Metu said.

Enfield said he hasn’t yet addressed USC’s tournament standing with his team in depth.

But, he said, "our players, in the age of the Internet, they know what's at stake.”

ESPN’s bracket expert, Joe Lunardi, has USC creeping toward the bubble. His projections list USC as a No. 10 seed, among the last four teams that do not have to play in the preliminary round in Toledo, Ohio.

Other predictors suggest USC might have more wiggle room. CBS Sports’ Jerry Palm is most bullish, with USC as a No. 7 seed. And Andy Bottoms, an Indiana blogger who has been the most accurate bracketologist over the last five years, according to Bracket Matrix, listed USC as a No. 9 seed.

A bye in the Pac-12 tournament is still possible but unlikely. That would require USC winning its last three games, Utah defeating California, and both Utah and California losing their final game. California plays at Colorado; Utah plays Stanford.

"That's kind of what we're playing for now,” Metu said. “Trying to get that bye in the first round of the Pac-12 tournament, it could be really crucial for us."

USC practiced at Grand Canyon University on Friday. Darion Clark, who transferred from USC to Grand Canyon during the off-season, visited practice. … Guard Jonah Mathews was held scoreless against Arizona on Thursday. It was the only time the freshman hasn’t scored in a game since November. … A USC win over Arizona State on Sunday would clinch a winning road record in conference play for the first time since 2008.

Update: Arizona State owns one of the conference's most prolific offenses, ranking third at 79 points per game. The defense? Not so much. The Sun Devils rank last in scoring defense, at almost 82 points allowed per game. … Two Sun Devils rank in the top 10 in the conference in individual scoring average. Torian Graham (18.8) ranks second, and Tra Holder (16.8) ranks sixth. A third, Shannon Evans II ranks 11th, with 15.6 points per game. … The Trojans shot 53% from the field against No. 4 Arizona on Thursday but lost by 13 points. It was just the second time this season USC shot better than 50% in a loss.