INDIANAPOLIS -- The player generating the most buzz with NFL evaluators in Indianapolis this week for the NFL Scouting Combine isn't in this year's draft.No, that QB -- USC's Sam Darnold -- won't be eligible for the draft until 2018, at the earliest,... 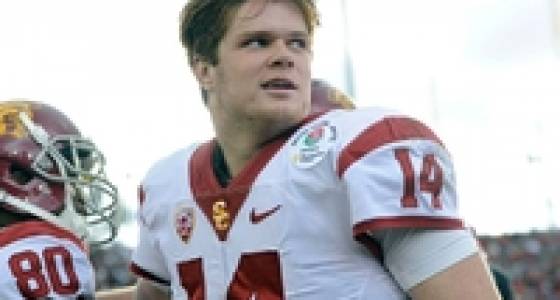 INDIANAPOLIS -- The player generating the most buzz with NFL evaluators in Indianapolis this week for the NFL Scouting Combine isn't in this year's draft.

No, that QB -- USC's Sam Darnold -- won't be eligible for the draft until 2018, at the earliest, but he's by far the most talked about player in Indy, an NFL executive told NFL.com analyst Daniel Jeremiah.

Text from NFL exec-- biggest talk at Combine, and it's not close--USC QB is rare. (It's tough to ignore him when you're studying other guys)

It's not surprising given the lack of excitement about the 2017 QB class that NFL teams are more intrigued by a player who won't be available for at least a year. Darnold became a star in this year's Rose Bowl, where he led the Trojans to a thrilling 52-49 win over Penn State. The redshirt freshman racked up 453 yards and five touchdowns in that game, going 10-for-10 in the fourth quarter as USC came back from a 14-point deficit.

Here's what Jeremiah wrote about him after watching him live in that game: "He has ideal arm strength and athleticism, but the best part about his game is his uncanny poise. He never gets too high or too low during a game and he almost looks bored inside the pocket. When evaluating quarterbacks, poise is the second-most important trait, right behind accuracy. Darnold is one of the most poised signal-callers I've seen in the last few years."

Now, as we all know, much can change in a year. One of the top QBs in this year's draft class, Deshaun Watson, was viewed differently a year ago than he is now. The hype train had already left the station for Darnold after the Rose Bowl, and if he's as good as NFL evaluators believe he is, the buzz will only build throughout the 2017 season.