USC men’s basketball remains calm on right side of bubble

LOS ANGELES >> One day after USC had suffered perhaps its most crushing loss of the season, an 83-82 defeat at Arizona State that saw the Trojans surrender a six-point lead over the final 30 seconds, Bennie Boatwright smiled as he walked off one of... 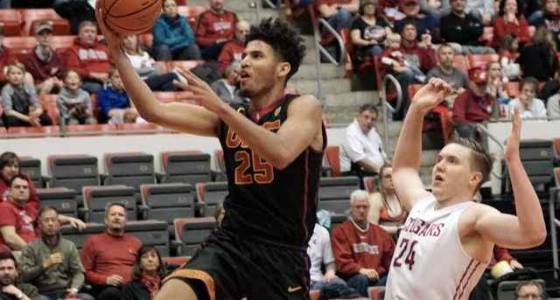 LOS ANGELES >> One day after USC had suffered perhaps its most crushing loss of the season, an 83-82 defeat at Arizona State that saw the Trojans surrender a six-point lead over the final 30 seconds, Bennie Boatwright smiled as he walked off one of the side practice courts at the Galen Center.

“At the end of the day, you wake up the next morning,” Boatwright said Monday afternoon as if to console himself. “It’s not life or death.”

The collapse against the Sun Devils threatened to damage the Trojans’ prospects for a second straight NCAA Tournament berth.

It marked their fourth consecutive defeat and their first to an opponent outside the top-100 of the Ratings Percentage Index, or RPI, the metric that the selection committee uses to evaluate teams. It also elevated the stakes of their final two-game homestand to close the regular season, starting Wednesday night against Washington State.

Despite the skid, the longest since Trojans coach Andy Enfield’s second season, players and others around the program have sounded at ease this week.

They remain aware of what is at stake.

“The next two games are must wins,” Boatwright said.

Asked if they felt pressure building, junior guard Elijah Stewart did not think so.

“We’ve all been playing basketball for a while,” Stewart said. “We know the ins-and-outs, the politics behind everything. We know, if you have a certain amount of wins, you don’t have to be concerned about the bubble. If we can go in and make strong strides in the Pac-12 Tournament, we should be fine for Selection Sunday.”

USC, at 21-8 overall and 8-8 in the Pac-12, remains on track to land on the right side of the tournament bubble, so long as it starts winning again.

Right now, nearly all of the bracket projections still include the Trojans in the field of 68. CBS Sports’ Jerry Palm seeded them No. 9. ESPN’s Joe Lunardi left them as a No. 11 seed. Of the 123 mock brackets compiled by the website Bracket Matrix, only four did not have them making the tournament.

Their position, though, could become more tenuous if they again suffer another bad loss. Like Arizona State, both Washington State and Washington are sub-100 RPI teams and are 10th and 11th in the Pac-12, respectively, entering the final weekend.

To feel safe, most “bracketology” experts believe USC must sweep the homestand and then win the first game of the Pac-12 Tournament, where it is likely to face the Huskies in a rematch based on the current conference standings.

Was there a number of wins Enfield had in mind to secure a spot in the tournament?

Enfield does believe his team already has a good case, pointing to resume-boosting victories over SMU and UCLA, which are in the top-20 of the RPI. Its non-conference schedule also included a win over BYU, which last Saturday gave once top-ranked Gonzaga its first loss.

But he conceded the Trojans must start playing better, too.

USC was amid a difficult stretch against Oregon, UCLA and Arizona, the only time this season a team had faced three top-six teams in succession, but at Arizona State, it in large part gave up its late lead through a series of miscues, turnovers and missed free throws, a litany of things Enfield did not hesitate to recite after practice Tuesday.

They must this week.