Mika Zibanejad scored 1:16 into overtime and the Rangers rallied to beat the Devils 4-3 on Saturday in Newark.Chris Kreider, Oscar Lindberg and Adam Clendening also scored for the Rangers. Antti Raanta had 36 saves, including a stop on a breakaway by Kyle... 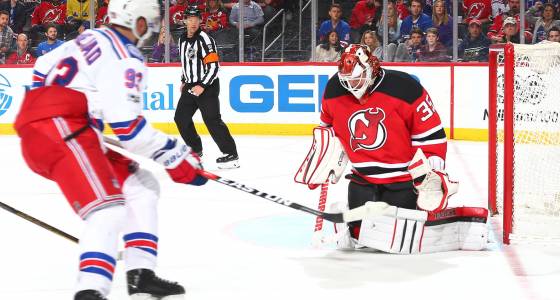 Mika Zibanejad scored 1:16 into overtime and the Rangers rallied to beat the Devils 4-3 on Saturday in Newark.

Chris Kreider, Oscar Lindberg and Adam Clendening also scored for the Rangers. Antti Raanta had 36 saves, including a stop on a breakaway by Kyle Palmieri just before Zibanejad scored for the first time in 16 games.

Zibanejad took a long pass from Brady Skjei, faked a shot and slid the puck between the goaltender’s legs.

The win was the Rangers’ third in three games against the Devils this season and their ninth in 11 (9-1-1).

Palmieri scored twice and Adam Henrique once for the Devils. Cory Schneider had 36 saves for the Devils, who are 1-3-1 in their last five games.

The Devils scored three goals in a 2:46 span bridging the second and third periods to turn a 2-0 deficit into a 3-2 lead. Henrique started the comeback late in the second period and Palmieri scored twice in 47 seconds in the third to give New Jersey the lead.

Clendening tied it with 4:25 to play on a shot from the right point after the Rangers made a late push. It was his second goal of the season.

Totally outplayed for most of the first two periods, the Devils got back on a wraparound by Henrique.

Palmieri tied it just 27 seconds into the third period on a shot from the top of the left circle that went off Raanta’s glove.

The go-ahead goal came four seconds after Kreider was penalized for delay of game. Travis Zajac won a faceoff and Palmieri deflected Andy Greene’s shot from the point past a screened Raanta. The Rangers claimed goaltender interference, but the goal counted.

Despite being outshot 15-10 in the first period, the Rangers grabbed a 2-0 lead on goals by Kreider and Lindberg.

Kreider got his 23rd of the season at 6:40 with a bit of luck. Defenseman Dan Girardi’s shot from the point deflected on the way in, hit off Kreider and popped into the net past a startled Schneider.

Lindberg got his second in three games and fourth of the season with 2:28 left in the period on a great counterattack. Defenseman Nick Holden carried the puck into the zone and dropped it to Jesper Fast, who set a cross-ice pass to his fellow Swede for a shot into an open net.

Rangers defenseman Kevin Klein missed his second straight game with back spasms. … Devils forward Pavel Zacha is out indefinitely with a concussion from Monday. … Rangers rookie Pavel Buchnevich was a healthy scratch for the second straight game. … Raanta has started three games and played in four overall since Jan. 1. … Devils defenseman Seth Helgeson was placed on waivers on Friday and not claimed.