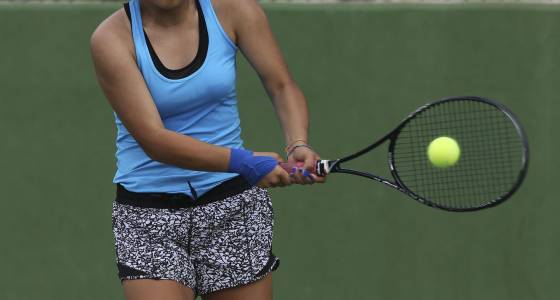 Her claim to the title of Class 6A’s best girls singles player, however, is still alive — barely.

Gillas, the defending 6A state champion, needed a win in a playback match against Del Rio’s Angela Vargas to land a trip to the UIL state tournament May 18-19 at Texas A&M’s Mitchell Center in College Station. Gillas toppled Vargas 6-4, 6-0.

The playback match came into play when Gillas, the two-time defending regional champion, fell to Austin Vandegrift’s Gabby Cusano 5-7, 7-6 (5), 7-5 in the final. Gillas was the lone area athlete to qualify for the state tournament. Reagan’s Natalie Gonzalez and Kyndall Quiroz lost to Austin Lake Travis’ Emily Bian and Mitali Khoje 6-4, 6-0 in a second-place playback match in girls doubles.

Wilbur is headed to state for the fourth straight year. She won a title in doubles in 2015 and was second a year ago. She also made it in singles in 2014.

Boubel advanced to the state tournament, where she seeks to join New Braunfels’ Lilly Kimbell and Stacey’s Isamarie Perez as the only area girls players to win four state singles titles. Boubel has beaten Rice in the state final each of the past two years.