As stoic as he is, Justin Jackson, the North Carolina junior guard, didn’t provide much of a reaction when he beat the shot clock with a long 3-pointer late in the first half on Saturday at Pittsburgh. Nor did he show much of one when he made another long... 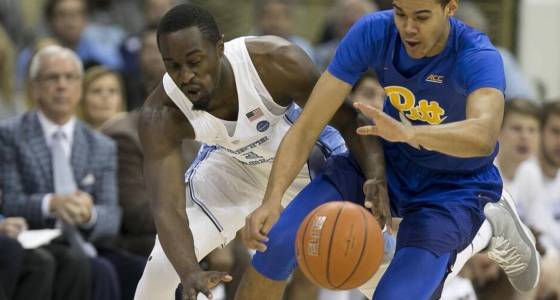 As stoic as he is, Justin Jackson, the North Carolina junior guard, didn’t provide much of a reaction when he beat the shot clock with a long 3-pointer late in the first half on Saturday at Pittsburgh.

His game, meanwhile, has changed considerably this season, though what he did at the Petersen Events Center is becoming routine now. Jackson led the Tar Heels with 23 points, as he’s often led them in scoring. He finished with five 3s, and that’s become the norm, too.

Before this season, Jackson made four 3-pointers in a game just once during his first two seasons at UNC. He has made that many in each of the Tar Heels’ past three games. To put Jackson’s perimeter shooting into perspective, consider this: He’s now made at least two 3s in 14 consecutive games.

During his first two seasons, he’d never made at least two 3s in more than two straight games. Jackson, who is becoming a leading candidate for ACC Player of the Year, is in the midst of his best, most productive stretch of his three seasons at UNC.

It has come at an appropriate time, with the Tar Heels attempting to ascend late in this season the way they did in the last, when they played on the final night of the NCAA tournament. There is still more than five weeks between now and then.

UNC, though, is beginning to resemble the juggernaut that tore through the NCAA tournament a season ago. With their victory on Saturday, the Tar Heels clinched a double-bye in the ACC tournament. If Duke loses at Miami later on Saturday, UNC will be the tournament’s No. 1 seed.

Jackson was one of four players who scored in double-figures for UNC. Joel Berry, the junior point guard, finished with 19 points – and like Jackson also made four 3-pointers – and Kennedy Meeks finished with 16 points and 10 rebounds, his 22nd double-double at UNC.

Tony Bradley, the freshman forward, finished with 10 points – the third time he scored in double-figures in an ACC game. The Tar Heels nearly doubled up the Panthers on the inside, and UNC outscored Pitt (15-14, 4-12) 42-22 in the paint.

One of the Tar Heels’ primary concerns entering the game was defending the perimeter. UNC escaped with an 80-78 victory the first time these teams played, on Jan. 31, and the Tar Heels held on to win only after Pitt’s Cameron Johnson missed a 3-pointer at the buzzer.

The Panthers in that defeat made 13 3-pointers, and they needed all of them to have a chance in the final seconds. On Saturday they made but seven 3s – and four of those came during the first 8½ minutes, when Pitt built an early six-point lead.

It didn’t last. The Tar Heels took control late in the first half and closed the half on a 10-0 run.

Jackson, as he’s known, rarely shows much emotion while he plays. He did, though, when he broke loose for a dunk with about six minutes remaining. While he finished the play, he released a short scream and a scowl, and UNC’s lead grew to 18.

About four minutes later, UNC coach Roy Williams called for his walk-ons to enter the game. They did, and the Tar Heels celebrated another strong victory in what’s becoming a run of them.