Fresh off a one-and-a-half-hour workout, former UCLA linebacker Jayon Brown relaxes into a padded chair at an oval table at Santa Ana’s Athletic Republic. His shoulder-length dreadlocks are wound tightly into an elaborate hairstyle somewhere between... 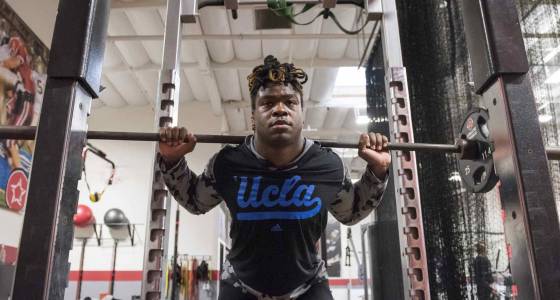 Fresh off a one-and-a-half-hour workout, former UCLA linebacker Jayon Brown relaxes into a padded chair at an oval table at Santa Ana’s Athletic Republic. His shoulder-length dreadlocks are wound tightly into an elaborate hairstyle somewhere between mohawk and beehive. With a laugh, the happy-go-lucky Brown succinctly sums up the first half of his UCLA career.

Brown’s UCLA career didn’t blossom until Jack’s wilted when the latter suffered a season-ending knee injury early in the 2015 season and left school early to pursue the NFL.

“Having a superstar on the team, playing behind him the whole time, you gotta take a back seat,” Brown said.

Not anymore. Brown was UCLA’s leading tackler the past two seasons. As a senior, he led the Pac-12 in tackles. After patiently waiting and working for his turn at UCLA, the Long Beach Poly product is more than ready for the spotlight at the NFL combine in Indianapolis, where he will be one of five former Bruins participating in the weeklong premier scouting event that starts Tuesday.

“I feel like I’m one of the top ’backers in this class,” Brown said.

Rarely did the former Bruin show a hint of hubris last season as he piled up a Pac-12-leading 120 tackles. He publicly brushed off the accomplishment of becoming the first UCLA player to reach 100 tackles in a season since Eric Kendricks in 2014, saying it was “just another stat.” He also had three interceptions and six pass breakups in addition to two fumble recoveries and 2.5 sacks.

After trying to let his career numbers speak for themselves, Brown can’t escape two key figures: his 6-foot height and 232-pound weight. Barring a late growth spurt — he’s still hopeful — Brown is a linebacker living in a strong safety’s body.

CBS Sports has Brown ranked eighth among inside linebackers and 204th overall as a projected sixth-round draft pick.

NFL.com’s Lance Zierlein writes that while his speed gives him a “fighting chance” to nab a roster spot, Brown “lacks the functional strength to become anything more than a sub-package cover linebacker.”

Whatever scouts have to say about his size, Brown has already heard it.

“Just because someone’s taller than me doesn’t make him a better man than me on the football field,” Brown said.

If teams want him to move to safety, he will. Above all else, he’s a football player, he said, but he has a small piece of his ego attached to the linebacker position because it’s a “tough-guy role.”

Brown already has a successful blueprint to follow in fellow former Bruins linebacker Eric Kendricks, who is listed at exactly the same measurements as Brown. Kendricks, a second-round draft pick by the Minnesota Vikings in 2015, had three 100-tackle seasons at UCLA and won the Lott Impact Trophy and the Butkus Award in 2014. He was named to the Pro Football Writers of America NFL All-Rookie team in 2015.

“In terms of instinctive, natural feel, that’s where they both excel, but Eric was off the charts,” UCLA linebackers coach Scott White said. “Just watch him find the rock and go. He has tremendous range. That’s where they’re both similar: range, instincts, football IQ, their feel.”

Brown believes maximizing his speed will optimize his chances at the next level. To prepare for the combine, he trained at Athletic Republic with renowned speed coach Gary Cablayan, who trained fellow Long Beach Poly alumnus DeSean Jackson.

Brown is aiming for a 4.5-second 40-yard dash to show his speed, a 10-foot broad jump with a vertical jump in the high 30s to show his explosiveness and more than 20 bench press reps to show his strength. He also hopes to display the fluid athleticism that earned him All-Pac-12 first-team honors last year.

Rarely does any player possess the athleticism of Jack — a once in every 15 or 20 year player, White said — but Brown made up for it with his natural feel for the game and penchant for hard work. Brown soon took on Jack’s multifaceted role on defense, lining up all over the field.

“He was always ascending, kept pushing the envelope and kept wanting to do things better,” White said. “When he had that mentality and approach, we were able to keep putting things on his plate.”

While many of Brown’s measurables don’t necessarily fit into the NFL’s stringent scouting policies, White said he makes up for it with intangibles that always contribute to winning like great leadership.

During every practice last year, while the team transitioned from individual period to team period, White gave his position group a brief Jayon period. During those 30 seconds at practice, the senior was tasked with setting the tone for the linebackers for the rest of practice. After working in the background as an undersized, under-the-radar recruit, Brown seized the spotlight.

He’s now ready for much more than a half-minute of attention.

“From him to go from that to where he left the program, it was tremendous, tremendous progress,” White said. “He leaves here one of the great players we’ve had.”