UCLA shows up on defense in big win over Arizona

UCLA owed Arizona one.Had the Bruins beaten the Wildcats in a shootout when the teams met last month in Pauley Pavilion, their indifference toward defense likely would have continued.Instead, the Bruins can thank Arizona for hanging 96 points on them on Jan.... 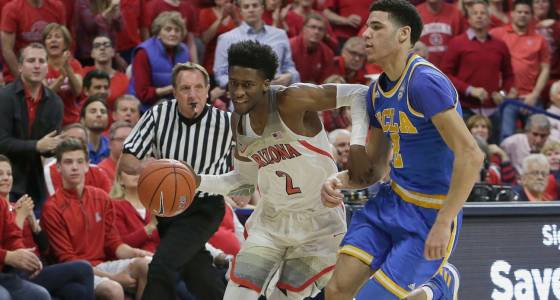 Had the Bruins beaten the Wildcats in a shootout when the teams met last month in Pauley Pavilion, their indifference toward defense likely would have continued.

Instead, the Bruins can thank Arizona for hanging 96 points on them on Jan. 21. That did what coach Steve Alford was unable to do through just talk: It got the Bruins' attention and started a defensive renaissance.

The Bruins are no longer simply relying on their high-powered offense, the one that's ranked No. 1 in efficiency and has a chance to top 1991-92 Duke as the best shooting team in modern history, at 53.2 percent from the floor.

UCLA's 77-72 win at Arizona on Saturday night showed that the team has completed its defensive turnaround.

The Bruins entered their game against Arizona with an adjusted defensive efficiency that ranked 102nd in the nation, according to Ken Pomeroy. That is by far the worst ranking among teams in the Associated Press Top 25. The second-worst in defensive efficiency among ranked teams is Notre Dame, which at No. 65 seemed like an impenetrable force compared to how UCLA had been playing.

The Wildcats got buckets at will in their win over UCLA. They shot 50 percent from the field and 45 percent from 3-point range and scored a blazing 1.32 points per possession.

It wasn't quite so easy Saturday night.

Arizona is the most methodical team offensively in the Pac-12, averaging about 66 possessions per game. UCLA would like that many possessions by halftime, but its defense allowed it to play at the Wildcats' pace without cracking.

In fact, Arizona looked disjointed offensively through much of the second half. Its normally reliable 3-point shooters, who entered shooting 40 percent from behind the arc, made just five of 18. The Bruins held Arizona to just 1.07 points per possession this time.

UCLA hasn't allowed a team to reach 80 points in a game during its current seven-game win streak. Compare that to its first 20 games of the season, in which it allowed eight teams to reach that mark, including Pacific in the season opener.

The Tigers haven't scored 80 since then. UCLA is allowing an average of 71.5 points in its past seven games.

It helps that Alford changed things up, using a 3-2 zone. Having Lonzo Ball's 6-foot-6 size out in front of the zone has made it more difficult for opponents to drive to the basket. His ball pressure also takes away easy passes.

With Arizona having a chance to tie the game with a 3-pointer on its last possession, Ball forced 5-foot-11 point guard Parker Jackson-Cartwright to go left with the ball. That forced the Arizona point guard to pass to Lauri Markkanen. Markkanen then gave it to Kadeem Allen, who shot an air ball that UCLA rebounded to clinch the victory.

Allonzo Trier, who led all scorers with 28 points and had three of the Wildcats' five 3-pointers, was standing on the right wing of the zone and did not get a touch on that possession.

UCLA probably won't be considered a lock-down defensive team at any point this season. But the Bruins at least take defense seriously now, which is enough to make them serious contenders.