Fujairah: The fifth Fujairah Open International Taekwondo Championship was a huge success with more than 700 players from 36 countries in the fray.The high point of the championship was the shock defeat of Olympic taekwondo gold medallist Ahmad Abougosh of... 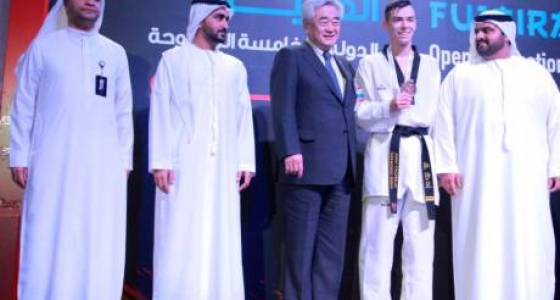 Fujairah: The fifth Fujairah Open International Taekwondo Championship was a huge success with more than 700 players from 36 countries in the fray.

The high point of the championship was the shock defeat of Olympic taekwondo gold medallist Ahmad Abougosh of Jordon at the hands of Russian player Minin Konstantin in the under 68kg category. The crowd at the packed Khalifa Bin Zayed Foundation Hall was awestruck when the fancied Abougosh, the first Arab to win Olympic taekwondo gold last year, went down to the Russian.

Shaikh Mohammad Bin Hamad Al Sharqi, Fujairah Crown Prince, who inaugurated championship watched the match and also presented the medals and trophies to the winners. He also announced a donation of US$100,000 to the Taekwondo Humanitarian Foundation (THF) for establishing a sports complex for the Syrian refugees in Jordan. The donation came as part of the UAE’s ‘Year of Giving’ campaign.

The three-day tournament was organised by Fujairah Martial Arts Club (FMAC) and in three age-groups: 12-14 year-olds, 15-17 year-olds and more than 17-years-olds. “It is the biggest ever Taekwondo event ever held in the country since the tournament started five years ago,” said Ahmad Hamdan Al Zayoudi, President of the UAE Taekwondo Federation. He said that Taekwondo is growing fast in the UAE with a large number of talented players preparing to compete at the world level competitions.

The event saw the participation of a large contingent from Pakistan comprising 20 players, six referees and seven officials. “We had learnt a lot from this event as our players got great opportunity to compete with athletes from around the world,” said Colonel Waseem Ahmed Janjua, President of the Pakistan Taekwondo Federation.

The UAE national taekwondo referee Ismael Hamad Al Sabiri has been selected as one of the best five referees at the championship.