Tyler Ennis adjusts to life with the Lakers, his fourth team in two years

Not long after the Lakers traded for him, point guard Tyler Ennis got a phone call from his new head coach.“That just made me feel a lot more comfortable,” Ennis said.On Saturday, Ennis participated in his first Lakers practice. The Rockets traded Ennis... 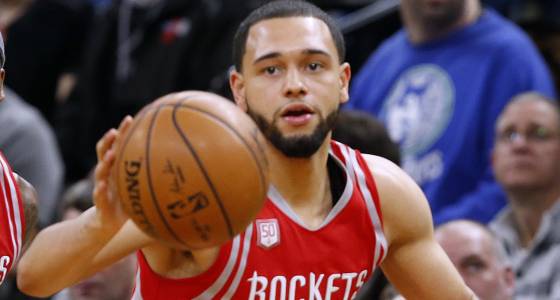 Not long after the Lakers traded for him, point guard Tyler Ennis got a phone call from his new head coach.

“That just made me feel a lot more comfortable,” Ennis said.

On Saturday, Ennis participated in his first Lakers practice. The Rockets traded Ennis and the draft rights to Australian Brad Newley to the Lakers at the trade deadline, in exchange for Lakers reserve point guard Marcelo Huertas.

“It was more of a shoot-around practice today with the early game tomorrow,” Lakers Coach Luke Walton said. “But he was good. Was picking up stuff pretty quickly. Solid practice as you can probably have for just meeting everybody and not having a lot of prep time to go through stuff.”

In the days before the trade deadline, Ennis thought there was a chance he might be traded. He said he made sure to stay in shape during the All-Star break just in case he was needed elsewhere after it.

The Lakers are Ennis’s fourth team in his two-year NBA career. It’s also the third time Ennis has been traded. He was traded to the Milwaukee Bucks during his rookie year, and then traded to the Rockets before this season began.

The Rockets had made clear they were planning to keep their core players together — those with extensive minutes — but others could be shipped out. Indeed, Houston traded Ennis and Corey Brewer to the Lakers and K.J. McDaniels to the Brooklyn Nets.

Brewer got to Los Angeles in time to travel with the team to Oklahoma City. He played four minutes on Friday night.

Ennis was in New Orleans, where the Rockets played Thursday night, when he got the news. He flew quickly back to Houston, before meeting the Lakers when both parties made their way to Los Angeles.

“I had some pre-draft workouts here,” Ennis said. “It was weird, it felt like it was yesterday I was here working out for the Lakers. I just feel great to come in with the young group. Everyone’s welcomed me with open arms. I’m really happy to be here and get into things.”

Lakers rookie Ivica Zubac was born in 1997, well after the peak of Magic Johnson’s career, but he was a little star-struck when he met Johnson for the first time this summer.

Zubac asked for more time to truly see Johnson’s impact on the team. It has been less than a week since Johnson took over as the Lakers president of basketball operations. But the impact of meeting Johnson and other Lakers legends stayed with Zubac. He grew in Bosnia and Herzegovina as a Lakers fan.

“I grew up watching their videos on YouTube,” Zubac said. “Their highlights and everything. I met him this summer. This summer I was like mind-blown. I met Magic, I met Kareem [Abdul-Jabbar], I met I don’t know, Elgin Baylor. Lot of Lakers legends. It’s been great so far. … Want to learn a lot from them.”

Lakers associate head coach Brian Shaw rejoined the team on Saturday. Shaw missed the Lakers’ one-game trip to Oklahoma City because he was ill. … Both Jordan Clarkson and D’Angelo Russell had four steals against the Thunder. It was the first time Russell had done so, but the 10th time in his career that Clarkson had done so. Clarkson is tied for seventh in the NBA with 1.3 steals per game.

Update: The Lakers played the Spurs close in their first meeting, then suffered the worst loss the Lakers have ever suffered to the Spurs in their second meeting. That second meeting was in San Antonio, and the Lakers lost by 40 points. Part of their hope in the second part of the season is that they can eliminate those blowout losses that became too common before the All-Star break.