AUBURN HILLS -- Marcus Morris missed the potential game-winner at the end of regulation, but when the game went to an extra session he more than made up for it.  Morris scored seven of his career-high 37 points overtime to propel the Detroit Pistons... 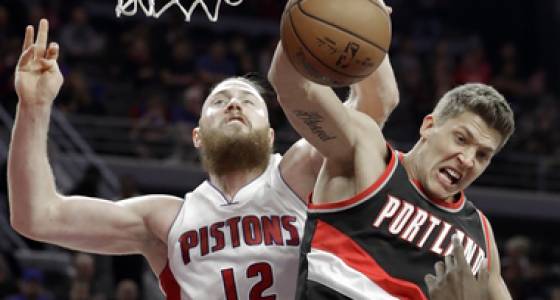 AUBURN HILLS -- Marcus Morris missed the potential game-winner at the end of regulation, but when the game went to an extra session he more than made up for it.

Morris scored seven of his career-high 37 points overtime to propel the Detroit Pistons to a 120-113 win over the Portland Trail Blazers Tuesday night at The Palace of Auburn Hills.

The Blazers had a chance to win the game at the end of the fourth quarter when Pistons forward Kentavious Caldwell-Pope was called for a technical foul with 10.9 seconds left with Detroit clinging to a 109-107 lead. Damian Lillard missed the technical free throw before getting his own chance at redemption. He drove the length of the floor for an easy layup to tie the game with 2.8 seconds left, setting up Morris' missed a leaning jumper at the fourth quarter buzzer.

Top performers: Morris added eight rebounds and six assists, shooting 13-for-23, including a perfect 3-for-3 in overtime. Lillard came up an assist shy of his first career triple-double, ending his night with 34 points, 11 rebounds and nine assists.

Turning point: Morris rose up for a jumper just left of the foul line with 3:17 left in overtime, swishing the shot while getting fouled before adding the free throw to put the Pistons up 114-111. His baseline jumper over Lillard on the next trip down the floor put the Pistons up five and the Blazers never threatened again.

Key stat: It was impressive that the Blazers were even able to force overtime. Not only did they have to rally back from a seven-point deficit in the final four minutes of the fourth quarter, but they had to overcome their own constant miscues. Portland turned the ball over a season-high 24 times against the Pistons, which led to 21 points the other way for Detroit.

The Pistons perimeter defense deserves some credit for forcing the Blazers to make tough passes through traffic. However, the Blazers had some stunning unforced gaffes. Both Meyers Leonard and Moe Harkless coughed up the ball more than 80 feet from the rim without a defender within 10 feet of them and there were a handful of other forced passes and careless dribbling that eventually did in the Blazers.

Portland shot 52 percent from the field and likely would have rolled to victory had it not turned the ball over constantly, allowing Detroit to take 20 more field goal attempts.

They said it: "When you have a 17 turnover differential and to still be in the game is probably a feat in itself," Blazers coach Terry Stotts said.

Trend tracker: CJ McCollum finished with 25 points, reaching double digits for a 50th consecutive game. He is one of 10 NBA players to score in double figures in at least 50-game straight games this season. McCollum has had just two single-digit scoring nights in 59 games this season.

Injury update: Evan Turner told The Oregonian/OregonLive that he will have the cast on his fractured right hand removed on Friday. Turner, who suffered a fracture of the third metacarpal in his right hand on Feb. 7, said he hopes to return to the court in "a week or so" after getting his cast removed, adding that he will have a clearer timeline after he meets with doctors on Friday.

The Blazers are back in Portland for a brief two-game homestand. They face the Oklahoma City Thunder at the Moda Center Thursday at 7:30 p.m. and then host the Brooklyn nets Saturday at 7 p.m.